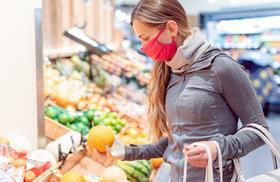 New research from YouGov has confirmed a number of Covid-related consumer trends, with the majority of UK shoppers surveyed saying their habits have changed during the pandemic.

Brits have preferred to shop near their homes or at larger stores, with 31 per cent buying groceries at a convenience store and 82 per cent using a supermarket.

The proportion of those who used local farms and markets fell by four per cent between 2019 and 2020, according to the YouGov figures. This may have been due to limited accessibility, however, as lots of places were forced to close.

While consumers haven’t shied away from using supermarkets during the pandemic, ‘click and collect’ and, in particular, online delivery have become more popular.

Almost two fifths (38 per cent) said they plan to make more use of these options in future, a trend which can be seen around the world and particularly in India (67 per cent), China (64 per cent) and Indonesia (63 per cent).

Brits are more likely to have recently used online delivery (34 per cent) rather than ‘click and collect’ (eight per cent).

In the UK there is evidence of a slight uptick in the proportion of people planning their shopping to make fewer trips to the supermarket as advised by the government.

Changes in consumer purchase behaviour throughout the pandemic varies across different FMCG categories. A quarter of Brits increased their consumption of cupboard products such as pasta, rice and tinned vegetables (23 per cent net) and 20 per cent bought more frozen foods, with a significant minority saying they stockpiled goods (30 per cent).

After the crisis, almost half of British consumers (49 per cent) said they want to buy more sustainable products, while six in ten will make more effort to support local businesses (61 per cent).

Commenting on the research, YouGov’s Kai Virtanen said: “The Covid-19 pandemic has created both challenges and opportunities within the FMCG sector.

“It hasn't had a one-size-fits-all impact on shopping behaviour and there are very real differences between different categories and markets.

“Despite a number of changes in Britons’ shopping behaviour throughout the past year, there are signs that not all of these changes will remain.

“While consumers have purchased food less from local sources during lockdown, most likely due to limited accessibility as places were closed, the majority intend to make more effort to support local businesses after the pandemic.

“Whether these changes will be long-lasting or short-term remains to be seen but, as we enter the second year of the crisis, understanding consumer sentiment will be for keeping FMCG players on the front foot.”

The white paper is based on more than 18,000 interviews and explores how the Covid-19 crisis has affected the FMCG/CPG sector worldwide across a range of categories.