Daffodils left to rot due to labour crisis 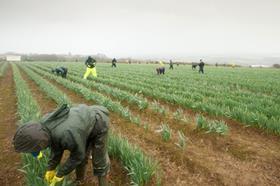 Daffodil growers in Cornwall were forced to let nearly 300 million flowers rot in the ground this year due to a lack of pickers caused by Brexit and the coronavirus pandemic, reports Business Matters.

Farmers are warning that if the critical labour shortage is not solved by the government before next year’s harvest, many will stop growing one of the nation’s favourite flowers.

Cornwall supplies nine out of ten of all daffodils grown in the UK after large-scale commercial operations were set up in the late 19th century to benefit from the mild climate.

But this year 274 million stems were left in the ground due to a lack of pickers, leaving the £100 million industry in crisis, the report said.

The figure represents 20 per cent of the entire crop and has left its growers threatening to pull out if more government support is not forthcoming.

He told the Commons that the government needed to expand its post-Brexit seasonal agricultural workers scheme (Saws) to cover flowers as well as food crops, and to extend its current six-month window by three months to cover the daffodil season.

Thomas said: “It is time for the Home Office to take the opportunity to demonstrate its support for British farming. Our farmers do not yet know if they will be given access to foreign workers through the seasonal agricultural workers scheme in just 14 weeks’ time.

“There is an urgent need to secure a workforce to harvest our daffodils.”