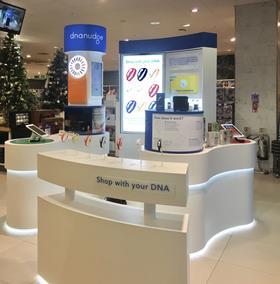 DNA-based personalised nutrition pioneers DnaNudge is ramping up its marketing efforts by rolling out pop-up services in London Waitrose and John Lewis stores.

DnaNudge’s technology works by taking a quick, on-the-spot cheek swab which is used by DnaNudge’s kit to generate a personalised DNA report for the user based on key nutrition-related health traits.

Users can then wear a wristband containing this information to scan over 500,000 food and drink barcodes, which will give a green light for food that’s a good match for the shopper, and red if it isn’t.

The pop-ups will be appear in Waitrose’s Canary Wharf store and John Lewis’ White City outlet for three months.

Professor Chris Toumazou, Regius professor of engineering at Imperial College London and CEO and co-founder of DnaNudge, said:“We're excited to be working in partnership with Waitrose and John Lewis to deliver our world-first DnaNudge service to customers in these iconic stores.

“Following the successful launch of our own flagship store in Covent Garden earlier this month, these new pop-ups bring our “Shop with your DNA” technology and “Eat right, move more” message for healthier food choices, direct to Waitrose and John Lewis shoppers.

“We're all incredibly excited about the future opportunities for customers as we extend our DNA-personalised services into other areas over the coming months.”

The technology is based around the idea that regular gentle “nudges” in the right direction, based on personalised DNA and lifestyle can lead to healthier, positive changes over time.

The DnaBand also features a physical inactivity monitor, which glows amber when the user has been inactive for too long during the day.

Moira Howie, nutrition and health manager at Waitrose & Partners, said:“Retailers have an important role to play in helping shoppers who want to be healthier, so we are pleased to be teaming up with DnaNudge to offer this new technology which enables customers to make more informed choices based on the dietary aspect of their DNA.”

In 2018, Waitrose & Partners also announced it was supporting aclinical trialwith DnaNudge and Imperial College London to explore – for the first time – the effects of DNA-personalised food choices on health outcomes for pre-diabetic individuals.