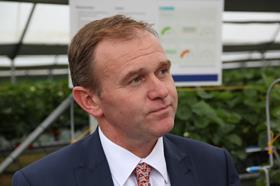 A group of influential farmers has written to Defra secretary of state George Eustice to endorse the recommendations in the National Food Strategy.

The group, which includes G's chairman John Shropshire, Soil Association boss Helen Browning and LEAF chief executive Caroline Drummond among others, urges the government to respond quickly to Henry Dimbleby's report for the sake of future generations and 'the ability of the NHS to care for society'.

Here is the letter in full:

'We are writing to you reflecting widely different experiences and communities within the farming sector, to endorse the recommendations of the National Food Strategy proposed by Henry Dimbleby.

'There are some you would expect us to support. Dimbleby is forthright about the government’s duty to protect British farming standards and suggests a practical mechanism to do so. He is clear about the need – in the public’s interest – to ring-fence the current budget for agriculture and the environment. He rightly says that government should be explicit about the amount of land that is needed for woodland and nature restoration, and the best places for this. He says we can achieve the changes that are needed while protecting the rights and interests of all farmers, including tenants and commoners while supporting rural communities. We are glad to see him get behind your department’s welcome plans to back practical innovation by farmers, as the driving force in regenerative, nature-friendly agriculture.

'He also recommends measures that will, gradually but not insignificantly, rebalance our nation’s food culture and markets, reducing the demand for cheap, high-calorie junk food, and boosting it for fresh, high-quality produce with provenance. This can only help British farming and drive the sector’s ambition and capacity to play our full role in reversing biodiversity loss, mitigating and adapting to climate change while producing plentiful, healthy food.

'Yet there are also recommendations that might make less comfortable reading for us, but which nevertheless deserve our firm backing. They are of course about eating less meat. This is such a sensitive issue, especially when UK livestock farmers are already committed to high welfare and reducing climate impacts. But as anyone who has looked seriously at the numbers knows – even those among us who champion reintroducing sheep and cattle into rotations – the reality is that people in developed countries do need to eat less meat overall, while ensuring that the meat we do eat comes from high welfare systems that support biodiversity, which the UK is well placed to achieve. The switch from industrially produced animal products, often destined for ultra-processed foods and relying on imported proteins that can drive deforestation and land use change, to regenerative systems where animals play their time-honoured role in building soil fertility and sustaining nature must happen swiftly.

'The debate in farming should not be about whether this is so, but about how to make this transformation quickly and fairly, for both farmers and citizens, avoiding unintended consequences, and with the best results for the climate, nature and animal welfare, both in the UK and globally. We welcome the clarity and nuance that Dimbleby has brought to the debate and the lengths he has gone to find ways of achieving this. Specifically, his proposals that schools and hospitals should serve less but better meat, more and better fresh produce; and that the biggest businesses should show leadership by reporting what they sell, and how it is produced; are prudent first steps.

'We urge you to give this report your deepest consideration, and to facilitate a positive government response rapidly. The wellbeing of future generations, and the ability of the NHS to care for society, depends on the leadership your government shows in this fundamentally important space.'