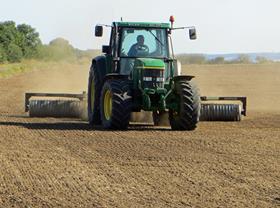 One of the government’s top advisers has ignited a row over British agriculture after suggesting it “isn’t critically important” to the country’s economy.

Leaked emails from Dr Tim Leunig, obtained byThe Mail on Sunday, revealed his evidence submitted to the National Food Strategy, led by Henry Dimbleby, in which he says Britain could be “rich without having its own agricultural sector”.

Leunig, who advises new chancellor Rishi Sunak, also suggested that Britain could become like Singapore, which imports almost all of its food from abroad.

NFU president Minette Batters immediately hit back at Leunig’s comments, calling comparisons to Singapore as “completely out of touch with where this country is”, onSky Newsyesterday.

She added: “Farms are the backbone of rural Britain. We’re the largest manufacturing sector, the last thing we want to do is start importing cheaper rural ingredients.”

In Leunig’s emails, he writes: “Food sector isn't critically important to the UK, and ag[riculture] and fish production certainly isn't”

He also questioned the tax breaks given to farmers, writing: 'We know that supermarkets also make very little, and that lots of restaurants go bust…Not sure I buy a 'life is tough for farmers, easy for restaurateurs' approach.'

According to TheMail on Sunday, when he was questioned on this approach by a member of the National Food Strategy, he responded: “All I am saying is that, as a logical possibility, a nation (or region) can import stuff. We see that in many places for many goods and services.

The Conservative government, which has been attempting to champion British agriculture while refusing to ring-fence its standards in future trade negotiations, also pushed back against Leunig’s comments.

“We have made it clear the comments are not in line with government policy,” a spokesman said.