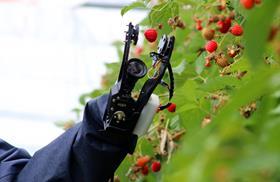 The tech company isinitially focused on developing robots to harvest raspberries, which are more delicate and more easily damaged than other soft fruits, and grow on bushes with complex foliage and berry distribution.

The funding from Innovate UK, the UK government’s innovation agency,will be used to support the tech firm’s plans to expand its team and develop facilities amid growing interest in its technology from producers. Labour shortages have been exacerbated by Covid-19 due to its impact on people movement internationally.