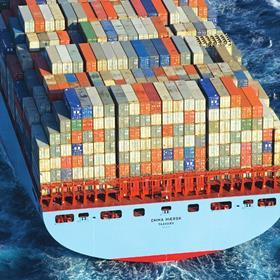 The many amphoras strewn across the Mediterranean seabed reveal some of the earliest supply chains in history. As the life-blood of civilisation, food sourcing has been a constant of political concern.

The Roman historian Suetonius recounts how Emperor Claudius was once heckled by a mob after a sudden drop in food supply. “When the grain supply was constricted because of continual droughts,” he wrote, “he was held up in the middle of the forum by a mob and showered with insults and bits of bread, such that he was scarcely able to escape to the Palatine Hill by a side entrance; afterwards he gave very thorough consideration to ways to bring food supplies in, even during the winter.”

Thanks to rapid advances in temperature control technology and sophisticated logistics, known as the cold chain, food waste during the transport phase has plummeted, almost to the point of indifference across the industry. This is perhaps unsurprising when other links in the chain bear much greater blame, for example household waste, which now accounts for over half of unnecessary food loss.

Yet last month, Defra secretary of state Michael Gove may have felt an affinity with his Roman predecessor Claudius, after several industry groups, such as the Chartered Institute of Environmental Health, warned of food rotting in “20-mile” lorry tailbacks due to post-Brexit customs checks, dismissed by Gove as “scare stories”. Political jousting aside, Brexit has raised the spectre once more of supply chain breakdowns, and the question of food waste in transit is back on the table.

It is estimated between four and 15 per cent of food is lost unnecessarily during transport and distribution worldwide. The large range is partly down to the problem of a “hidden” shelf life. For example when a customer buys a tomato and it goes off before it’s stated shelf life, then that waste is not the customer’s fault. But there is also a difficulty in defining when food actually becomes waste.

Ed Moorhouse, of Agri-food Solutions, says: “When someone transports produce loaded in a lorry for example and it comes out unfit for your target market, it doesn’t mean it’s waste and it partly depends on your ability to find an alternative outlet for it.

“If a lorry has poor temperature control the produce generally will still have some other market. The most common form of waste is frozen foods. When the lorry breaks down it unfreezes and the whole lot becomes soup.”

Tesco data on certain products shows that food waste of fresh produce in transport is pushing negligible levels. For example it calculated apple and grape wastage as being less than one per cent during processing. Moorhouse agrees that the figure is “unlikely to be more than one to two per cent”.

Vicki Newstead, of Cavendish Freight Services, offers anecdotal evidence of how successfully sea freight has mitigated food waste. “It’s so rare that we have a problem,” she says. “I have been in shipping about 20 years and we have had two incidents when the fruit was unusable – they were grapes that had gone to mush. It was monsoon season in India and all the packaging was wrong.”

Stuart Coleman of Perishable Movements echoes similar experiences. “From my experience we rarely have anything that’s completely ruined, it’s quite rare,” he says. “It depends on the actual produce, which tend to be affected by their origin. There was a year when limes were ruined due to the whether in Mexico and Brazil, where it had rained heavily.

“It depends how they load the containers, if they load them incorrectly,.They get ruined if they are not stacked correctly as the air flow is wrong.”

As Moorhouse says, waste therefore is rarely absolute, but more about if supply chains can find alternative uses when they fall foul of industry standards. Animal feed use, specialist wholesalers and more recently bio-energy companies have meant food which is not fit for retail doesn’t have to go straight to landfill. In fact, Moorhouse attributes the large increase in UK landfill taxation in the past two decades to a fall in transport waste, as it became cheaper not to dump food.

Nevertheless, unforeseen variables can still drive waste numbers up. In 2015, during the height of the European immigration crisis, the press reported that £2 million worth of food and fresh produce was being dumped every month due to people attempting to enter the UK illegally in lorries. Retailers were criticised at the time as entire lorry loads of fresh produce were dumped, when only a few pallets were affected.

James Hookham, deputy chief director of the Freight Transport Association, says that has since subsided, although it still can happen from time to time. “It does persist but it’s a much lower level in terms of frequency. That’s entirely due to the French government and the removal of the Calais camp. Large numbers of people, in the thousands, were just a few hundred yards away, it was very easy for them to wander across the field and try the first truck parked up.”

At longer distances, there are higher chances of something going wrong too. Tesco says that seven per cent of bananas are lost during the processing phase as greater journeys increase the chances of cold chain ruptures. Mechanical breakdowns of temperature and atmosphere control, pests, as well as incorrect loading practices can cause uneven air and temperature distribution, leading to pockets of waste.

Moorhouse adds: “The bigger waste occurs on the long haul. Effectively they are putting in the hold unripe fruit and they are attempting to prevent them from ripening, but if something goes wrong when it comes into the UK port there’s a large market for ripe bananas. The problem comes when you’ve got half a ship of them – nothing can absorb that volume.”

Tech firms are still trying to fine tune monitoring and sensory equipment, which also suggests there is still a market for cutting down on transport waste. UK company Cerulean says its monitoring software offers a unique way of detecting uneven airflow and temperature, while packaging specialist Coveris continues to develop oxygen “scavenging” wrapping. Monitoring software by the likes of Cerulean and ERP platforms have also contributed to food waste reduction by increasing accountability along the supply chain.

But waste is not beyond the economic adage of diminishing returns, and with the percentage of food waste in transport decreasing, the costs of lowering that figure only increases. Moorhouse suggests we may now be at peak capacity of transport waste efficiency.

“I think we are already there,” he says. “If you had asked could we do more 20 years ago, my answer would be yes.” But he concludes: “Can you reduce the waste on board? Yes you can. But can you do that while maintaining the existing price of bananas? No.”