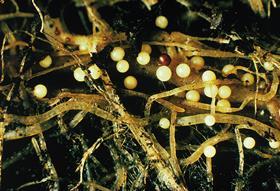 The findings from on-farm trials could help combat a deadly potato disease that causes around £26 million worth of damage to UK crops each year, AHDB has revealed.

According to demonstrations carried out by AHDB Potatoes and Harper Adams University, the use of fluopyram as a nematicide (to kill nematode worms) can boost yields in crops affected by Potato Cyst Nematode (PCN).

The chemical, previously used as a fungicide, pushed up yields in a range of potato varieties at Heal Farms in Shropshire, which has high levels of the disease.

“The new Bayer product which contains fluopyram was compared with Nemathorin and Vydate. It performed as expected, showing a yield increase compared with an untreated control, though the other nematicides out-performed it.”

The findings come after on-farm trials were held in Shropshire during the 2017 growing season that looked in greater detail at the control of PCN.

The aim is to improve the tools available to growers and agronomists for dealing with infestations.

The results of the trials were announced at AHDB’s Strategic Potato (SPot) Farm West results day in late January to an audience of more than 60 growers and agronomists.

Bayer regional technical manager for Shropshire, Gareth Bubb, described the contribution of fluopyram to reducing cysts and eggs as “impressive, but not a silver bullet”, adding that it will provide “those with low to moderate PCN infestations an opportunity to combat populations and will form an important part of their nematode control strategy”.

Details on application rates and programme partners will follow once the product receives regulatory approval, he said.

The trials will continue at Heal Farms during 2018.