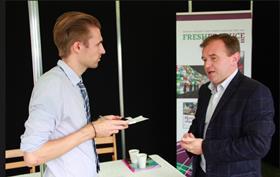 The departure of pro-GM Owen Paterson as environment secretary shouldn’t affect plans to encourage the growing of such crops in the UK.

That’s according to farming minister George Eustice, who spoke exclusively to FPJ at Fruit Focus and reaffirmed the government’s commitment to biotechnology.

GM crops could be grown in the UK from next year after EU ministers relaxed laws on the controversial farming method last month, giving individual countries the chance to decide if they wish to grow them, to the disdain of anti-GM campaigners who believe the move could seriously damage organic farming and wildlife.

Eustice said: “I don’t expect [new Defra secretary] Liz Truss to change the process, but she’s only a few days into the job and I haven’t discussed this issue with her yet. But the UK position is pretty clear – that we should have a science and evidence-based approach, and that should mean we’re open to using GM providing the right regulation is in place.”

While the government is expected to vote through the change using its coalition majority, the devolved administrations in Wales and Scotland have opted out of growing GM crops on their land.

Eustice said: “We’ve discussed the issue with the devolved administrations. Although Wales and Scotland are broadly supportive of the UK approach, one of the key settlements that countries like Germany pushed for was that in order to break the logjam and start to get some licences issued for the use of GM crops, it may be necessary for some national governments to have a derogation, and that’s probably the best way forward.

“For those who, for very clear political reasons, object to the use of GM crops in any way, they should be able to have a national derogation from them, whereas those countries who want to use them should be able to.”

“He was a great champion for the countryside and also on many green issues, such as improving habitats for pollinators,” he added.

“He was skeptical about other issues, such as the approaches taken on things like climate change, but it’d be wrong to interpret that as him having a blanket opposition to environmental issues.”