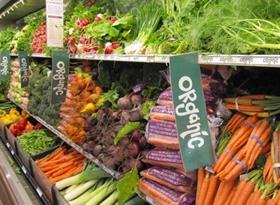 Farmers who convert to organic will receive up to double the previous rates in a raft of government payment increases that are launching amid strong growth across the organic market.

Payments for organic farming in England are rising by between 46% and 500% for those entering a new scheme with Countryside Stewardship, which opened its window for applications yesterday (8 February).

The rate hike comes alongside a surge in the organic market, with a 23% increase since 2019 revealed today (9 February) in Soil Association Certification’s annual Organic Market Report.

Organic is out-performing non-organic sales, with the market reaching a record net worth of £3.05 billion, and government payments for managing organic farmland are also going up by at least 50%.

Some organic farmers will now be able to earn triple or even six times as much as before from government cash incentives, which will be available until at least 2024 when an organic standard is promised as part of the new Sustainable Farming Incentives (SFI).

Adrian Steele, Soil Association Organic Sector Advisor, said: “The changes to farm policy and payments post-Brexit are causing lots of concern for farmers. But it is clear is that there are big opportunities for nature-friendly farming, and organic is set to receive renewed government support.

“The good things that agroecological and organic farmers are doing, which have long been overlooked, are now set to be rewarded under the new Environmental Land Management Schemes. The longer-term goals that government has set out for agriculture, with a new focus on protecting soils, wildlife and the environment, are in harmony with the principles of organic farming. Alongside continued growth in the organic market, this should give farmers confidence in switching to or maintaining organic practices, despite the short-term uncertainty facing every farm.

“We are pleased to see this commitment to rewarding organic farming – it’s the first step towards recognising that we need to work in harmony with nature across the whole farmed environment.”

Tom Cackett, Associate Director for Food and Farming at Savills, said: “It’s exciting to see this increase in organic payment rates because it’s a commitment to good food production alongside the environmental focus. There are some corners of every farm that never really grow anything that can be given over to nature, but we’ve got to be slightly careful if we are taking large areas out of food production. Organic farming can often be a good way of tackling that issue. Instead of marginalising nature, why not integrate it across the whole farm, and then you’ll also be able to get those payments for the whole area instead of just for the corners or edges.

“If you’re doing good things for the environment, it seems almost certain there will be funding to support that for the foreseeable future. With the increase to organic management payments, the organic farming sector is one of the only sectors that isn’t going to see such a dramatic drop in subsidy income when the Basic Payment Scheme payments reduce and eventually disappear.”

British shoppers are now spending almost £60 million on organic products every week, with a particularly strong performance for online and box schemes, which together delivered growth of 13% worth £558m.

But the challenge remains for UK farmers and supply chains to step up and meet this rising demand with British produce, rather than imports.

The total area of land farmed organically has remained largely the same, increasing by just 0.8% compared to 2019.

But the latest figures from DEFRA show that in 2020 there was a 12% rise in the area of land currently going through the two-year conversion period to become organic, compared to the previous year.

Ben Andrews runs an organic mixed farm, with beef cattle, veg and cereals in Herefordshire. He said: “Abel and Cole is our biggest customer and demand shot up as the pandemic kicked in – we couldn’t supply them with enough. We’re expecting demand to level off now, but for it to settle at a higher level than it was before.

“Now we’re having a cost-of-living crisis, but I think organic farming can be more resilient to market changes. You are often less vulnerable to any big fluctuations in commodity prices because you’re running a more circular system without bringing so much onto the farm.

“There are a lot of people who are faming extensively or even to organic standards who haven’t really thought about the benefits that converting could deliver. I absolutely believe it’s the right way to go if you’re not farming intensively anyway. The key thing is knowing where you’re going to sell your end products, but there are lots of smaller options that work well for organic which can give you more opportunities to be more flexible about what you grow.

“But it’s not just about avoiding synthetic inputs – going down the agroecological route is important. It’s thinking about the health of the soil and biodiversity, and not relying too heavily on growing one or two crops.”

The Soil Association hopes the new farm payments and incentives will help to encourage all farmers to shift to more nature-friendly practices, including a bigger increase in those converting to organic.

But the organisation has warned that the Environmental Land Management Schemes won’t work in isolation, calling for fairer, shorter supply chains that prioritise nutritious food over cheap, ultra-processed food, and which fairly rewards farmers.

The only exception in the rate increases is those for management of organic improved permanent grassland. These payments are due to remain at the same rate in 2022, and then be halved in 2023.

Adrian added: “We are surprised and disappointed by the reduction for ongoing management of organic, nature-rich grasslands, and we have taken this up with Defra as part of our efforts to lobby for adequate recognition for all sustainable farming practices. We will be seeking to ensure that organic farmers will be best placed to receive the highest level of payments for improved grasslands under the new Sustainable Farming Incentive standards. The government has also assured us that when Sustainable Farming Incentive rates are finalised after 2024, Countryside Stewardship agreement holders will be able to switch over to them without penalty.”