Growing up in Amsterdam 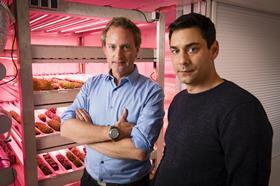 The sky is the limit might be a cliché but it also neatly sums up the ambitions of Amsterdam’s first commercial vertical farm, which aims to feed half the city with herbs and salad by 2025.

John Apesos’ vision for a sustainable leafy greens and herb production system became a reality this month after the opening of GrowX, a 250 sq m pilot facility that is already supplying 30 of Amsterdam’s leading chefs. Vertical farming in cities isn’t a new concept, but Apesos has his sights set on developing an efficient and sustainable farm model that can be rolled out to other European cities and eventually the world. It’s an ambition that might seem unreachable, but GrowX has the backing of urban farming incubator fund Square Roots and its chairman Kimbal Musk, younger brother of blue sky thinker and entrepreneur Elon, and the project has so far attracted €1.85 million in funding from two Dutch green investment funds.

“I initiated the vertical farm concept in Amsterdam after a TedX talk in 2011,” explains Apesos. “We wanted to try and retrofit high rises into vertical farms. At the time there was a real estate crisis across the whole of the Netherlands, with owners looking for any ideas to fill the buildings.

“We are testing the market viability of this design. No one in the Netherlands questions whether plants can be grown indoors. The question here is can you sell these plants at market prices, and it would appear we can.

“We serve 30 clients, we’ve been running for three months and already we serve five of the 11 Michelin-starred restaurants in the city,” he adds.

Having opened for business, GrowX is now working with top chefs, including from leading restaurants such as The Hoxton, The Duchess at the W Hotel, and the Conservatorium Hotel, to perfect its product range. Micro herbs represent 20 per cent of the farm’s output, with 30 varieties selected from a sample of 100 seeds, while the remaining 80 per cent is leafy greens, including kales and mizunas.

This first farm has four layers that are two metres high, meaning workers can keep their feet on the ground. “The next system will look towards the sky and that’s the one we want to use in the other European capitals. It will be seven metres high with more automation,” says Apesos.

With sustainability at its core, the farm is powered using 100 per cent wind power sourced from a green energy provider, and produce is delivered across Amsterdam in an electric van and by bike.

While GrowX is a high-tech operation with a hydroponic system powered by data and algorithms, Apesos notes that this is not unusual in the Netherlands, a world leader in glasshouse production and protected crops. “Growing plants hydroponically is very well understood here. The problem with the vertical farm projects is they are usually too small,” he says. “Vertical farms actually have simpler requirements and fewer variables than a greenhouse.”

The reason indoor hydroponics haven’t yet taken off in Europe, according to Apesos, is the “well-known” gap in funding that European tech start-ups can attract compared to Asia or America. The problem doesn’t appear too daunting though, as he adds: “I’m going to go to their countries and get their money – if you want to do something in vertical farming it would be wise to look at us.”

Another barrier to scalable vertical farming is price, leading most operations to begin by producing high-value micro greens, although Apesos says where the product is the same GrowX will match the competition. For now, the company is working with executive chefs of big catering companies or high-end restaurants, who are already set up to work with specialist suppliers, whereas smaller businesses will typically work with one or two larger distributors.

“Vertical farming in cities also solves issues with sourcing from all over the world on micro greens, when the quality is on different levels. It gives buyers more control,” explains Apesos, who says he knows of a Dutch salad producer group that is diversifying into vertical farming for this reason.

Despite its lofty ambitions, GrowX is focusing its short-term efforts on Amsterdam’s out-of-home market, catering companies, restaurants, pre-made meal companies, or “anyone but a retailer”, says Apesos, who believes the buying power of a company like Tesco is too big for vertical farms.

Part of the issue is how to market produce from a vertical farm to consumers. “There is an issue about whether consumers know it’s an added-value product,” he says. “In our market research, consumers know conventional and they know organic and that’s it. In vertical farming this becomes a political debate. We don’t use pesticides, but in Europe organic produce has to be grown in soil full stop.” [The USDA has recently announced hydroponically-produced food can be certified as organic in the US].

“What we’re talking about is clean food,” continues Apesos. “That is the next organic and that’s the message we’re trying to push. We don’t use pesticides or herbicides, we recycle our water and we’re one of the first vertical farms in the world to be powered by green electricity – our energy is 100 per cent from wind.”

While he declines to quote the current volume output of GrowX, preferring instead to focus on the physical size of the facility, Apesos is clear of the potential in vertical farming, which he believes will be “a billion dollar market in a few years”.

With the ambition, financial backing and a scalable plan for growth built around automation, GrowX is determined to set an example and lead vertical farming into the future.

Get to know: GrowX

• 20 per cent of the farm’s output is micro produce and 80 per cent is leafy greens.