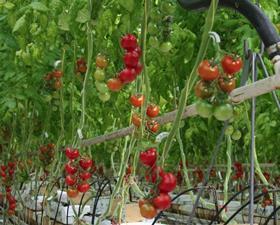 This summer’s series of heatwaves have made it a “wonderful year for tomatoes” according to growers.

With the bulk of British tomatoes produced in glasshouses, good light levels and extra heat have made for a quality crop of tomatoes according to inews.co.uk.

British Tomato Growers Association chief technical officer Dr John Morley said: “Tomato plants tend to do better when they’re stressed, and there have been times this year where there has been a very intense heat. The sun helps with flavour.

“Tomatoes are complex. They have a lot of components – sweet, sharp, sour, umami [which is why with salt they are the whole package]. It’s why putting them in the fridge ruins them.

“It’s been a wonderful year for tomatoes. The weather conditions have been good. It doesn’t necessarily give you more, but it’s been great for flavour. Also, people choosing to shop more locally, and consuming food more quickly at home, has really helped.”

“We’ve had a relatively stable three years – there have been amazing light levels and it’s really helped. The tomato flavour has been consistently good and customers have been ecstatic. Our Instagram page has doubled this year.”