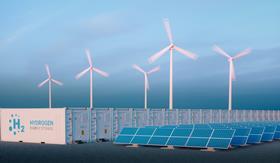 The James Hutton Institute has been awarded funding from the Scottish government’s Community and Renewable Energy Scheme to undertake a feasibility study for a green hydrogen-powered farming community around its Glensaugh farm.

The study is the initial phase of the HydroGlen project, which aims to transform the Aberdeenshire research facility into an energy-efficient, carbon-neutral hub powered entirely by hydrogen and capable of supplying energy to the wider local community.

The initiative hopes to provide a demonstrator for communities across Scotland about a new means of being energy-independent or even fuel producers themselves, offering a transformative model for contributing to Scotland’s net-zero ambitions.

“These include selling hydrogen fuel; using hydrogen to produce anhydrous liquid ammonia for fertiliser; and potentially unlocking new capital investment models. We aim to demonstrate that communities can achieve energy self-sufficiency from a triple energy vector perspective - electricity, heating and transport fuel - and that additional associated decarbonisation activities are possible and feasible.”

The HydroGlen feasibility study will be led by James Hutton scientists and renewable energy consultants Water to Water, with findings expected in early 2021.