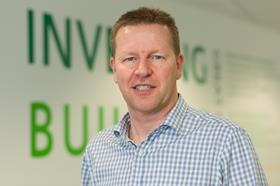 Ian Summerfield: We are quite sharp and fleet of foot, so wherever it takes us we'll have a go

'I like being in control of the map, while someone else is in control of the steering wheel,” Ian Summerfield says of his past hobby as a rally driver. But he could just as well be talking about his own role as chief executive of the Langmead business.

As the ‘navigator’ to David Langmead’s financial ‘steering wheel’ (Langmead is 100 per cent shareholder in the business), Summerfield’s role, in his own words, is “to manage and maximise David’s farming assets”. For the last 25 years he has guided the business, investing where necessary, and most recently spearheading its return to direct produce trade with the launch of Langmeads’ herbs business around four years ago.

The £17 million herb business represents a fifth of the wider group in terms of activity, not turnover, alongside subsidiaries in property, solar and arable farming. The company also contract-packs herbs at its facilities in Sussex, and has a composting business through which it collects waste for Chichester Council and sister company Natures Way Foods.

But the sub-£20m turnover in herbs perhaps doesn’t reflect the company’s scope and ambition. Summerfield says he is “lucky to work for a shareholder who takes the long-term view” and he has proved this recently by opening the doors of the UK’s first fully-automated herb production facility. At a cost of £3m, the new facility employs only seven and a half staff (equivalent hourly labour) and has the capacity to produce 100,000 pots per week.

The glasshouse itself is eerily deserted – automated cranes move trays of pots down a production line through packing, germination and into the vast growing space. Rows of pots move forward every day until two robots collect them at the bottom to coincide with the end of the 30-day growing cycle.

Summerfield says the concept behind the glasshouse came from the need for quality and consistency in the potted herb market. “We came into the herb market about four years ago, and really if you just do cut and bunched, without pots, then you’re not considered to be in the herb market.

“So we really needed to get into potted herbs, and once we decided to do that, being Langmeads, we had to try and do it the best we could.

“Looking after potted herbs in retail is quite hard, the shelves are quite tough on it – so you need to put the best product there in the first place. So we started by focusing on quality, and then given that our industry is quite labour intensive, we were then looking at how we can manufacture out some cost. The automation also builds on quality actually, because robots repeat the same things over and over again they take out the possibility of error.”

It’s clear that automated production is only the solid platform at the start of the journey for Summerfield. He can’t talk quickly enough about what’s next for the company – having established volume and quality capacity, there is endless potential for NPD, new routes to market, diversification and volume increase. “I’m not worried about turnover – I’m worried about sustainable growth and being profitable,” he says. “We arrived new and it upsets people because we took market share, but I’m not so obsessed with the value, I’m wondering what we will do next.

“If you consider where herbs are used in the marketplace, whether in herb manufacturing, oils, teas, frozen, dried, there are a lot of opportunities.

“We’re quite sharp and fleet of foot, and so wherever it takes us
we’ll have a go. It will be all about innovation.”

Summerfield’s penchant for ideas is in evidence throughout Langmeads’ airy, modern-style offices. The white walls can be used for spur-of-the-moment brainstorming using wipe-off marker pens, and there is an informal meeting-cum-breakfast-bar (dubbed the 11 o’clock space) where the team meets every day, along with a Skype presence from Dundee-based Scotherbs, to discuss any issues.

Langmeads used to be a lettuce supplier, before selling that side of the business to G’s-owned firm The Lettuce Company, which continues to grow on Langmeads’ land. Walking round the automated glasshouse, it’s hard not to see the potential for the production of other table-top or potted products, and I ask Summerfield whether he has plans to move back into any other markets. “We will certainly become involved in other produce lines at some stage, again driven by trying to be innovative about our products,” he replies, before moving swiftly on to describe Langmeads’ strategy of land utilisation. “We rent the land out for lettuce, and to other companies such as Barfoots, and we’ve got a big potato grower on our land at the moment,” he explains. “The land is utilised for produce –one of the reasons we’ve gone into Suffolk is we wanted some new and interesting land, and that land is being used for onions and carrots at the moment.”

Summerfield is dynamic, charismatic and self-deprecating – as we leave he notes that a business doesn’t need “egos” at the top in order to succeed – and coincidently, these are all traits he says he admires in other produce businesses such as G’s.

Talking about the UK herb market, Summerfield is astute as to current market conditions. “The biggest challenge is the supply chain is under pressure to consolidate, to match the consolidation that the retailers want. That’s understandable, but that will take some victims. Some businesses that have been long-established will go. Some new businesses will appear, but that’s always been the way,” he says, adding that while he doesn’t rule out acquisition, he would “prefer to grow organically”, and there is nothing on the horizon at present. “We’ve got a list of products that we’re assessing. We haven’t filled the potted nursery so I could do with one or two more lovely customers, which we’re talking to at the moment,” he adds.

And what about that rally driving? Summerfield is typically understated – he says he was a “bad rally driver”, and a “bad cricketer”, taking until he was 40 to score his first 50, and these days has seemingly replaced sport with herbs and the occasional spot of tennis. Such modesty is admirable, and perhaps rare among the corporate top level, but you’d be a fool to underestimate the Langmeads leader’s ambition and capacity.

“The herb market is in strong growth, in both cut and potted herbs. I think it has hit some of the macro-trends at the moment – cooking from scratch, flavours, flavours without salt,” says Ian Summerfield, CEO of Langmeads.

“The market is estimated to be about £60 million in price, but it’s definitely bigger than that. I think it’s nearly £100m. It’s quite a small market so it’s not very well picked up by data.”

According to figures from ProduceView, a large pot of basil was retailing for £2 at Tesco and Sainsbury’s this week (w/c 10 August 2015), and 99p in Morrisons.