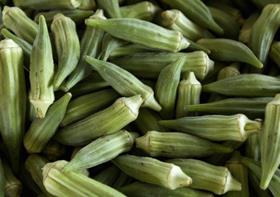 The Indian government suspended exports of okra to Europe last week while it reviews industry pest control procedures to bring shipments back into compliance with EU standards.

In a notice issued on 31 March, the Ministry of Agriculture’s plant protection, quarantine and storage directorate said it would stop issuing phytosanitary certificates for okra exports to the EU with immediate effect.

The move follows the interception of pests, notably live thrips, in okra shipments, both during pre-shipment inspections in India and on arrival in the EU.

India’s Ministry of Agriculture recently succeeded in lifting an EU ban on its mangoes. India’s plant quarantine directorate has given assurances to the EU that it will ensure pest-free exports of fresh fruit and vegetables, and this agreement appears to be a key factor in the voluntary suspension of okra shipments.

The plant quarantine directorate said it would review the decision to suspend exports after it had ensured that okra sourced from registered farms met the EU’s phytosanitary standards so that only thrips-free okra is processed in packhouses.

Indian authorities are currently undertaking a risk assessment on farms to ensure the recent high incidence of pests no longer poses a threat to shipments. Some exporters are hopeful that shipments will be allowed to resume next week, meaning only a two-week hiatus in trade.

Kaushal Khakhar, CEO of Kay Bee Exports, one of India’s leading okra exporters, told Fruitnet that the large number of pest interceptions followed unseasonal rains during February/March in India, which increased the incidence of thrips.

“The weather in the summer months of April and May is now expected to be clear. This, together with good agronomic practices and packhouse controls, should help reduce the risk of thrips on okra,” he noted.

While okra growers primarily follow Integrated Pest Management (IPM) and avoid the use of certain chemicals to minimise pesticide residue levels, this in turn tends to increase the risk of pests such as thrips, Khakhar explained. 'A balance between usage of organic plant protection products and chemicals will need to be adopted to ensure that both pesticide residues as well as pests are kept in check,' he said.

India’s okra exports to the EU are centred on the UK, where the vegetable is widely used in Indian cuisine. While India is the leading exporter of okra to the UK, the suspension of trade will see buyers turn to alternative sources such as Thailand and Kenya to fill the gap.

Indian okra is available year-round but supplies peak between October and May. The monsoon season scales back India’s shipments between June and September, when UK buyers tend to lean on Jordan for supplies.