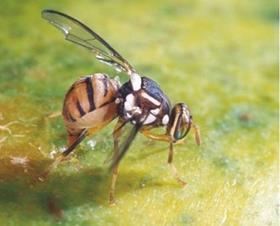 They say the results could 'transform' the fresh produce industry, and support the argument that organic fruit and vegetables have greater nutritional content than their non-organic counterparts.

'In our study we proved that wounding leaves in plants like those caused by insects produce healthier organic fruit,” said Luis Cisneros-Evallos, Agri-Life Research horticulture and food scientist in College Station.

'There was the existing idea proposed by others that insects present in the field in organic farming could cause a stress response in the plant and increase antioxidant compounds,' said Cisneros-Zevallos.

'However, this hypothesis or concept was never tested until now, where we mimicked the damage caused by insects.'

There has long been a theory in orgnaic farming that plants under greater stress are triggered to produce more nutritious, tastier crops.

In the study, scientists mimicked leaf damage caused by insects to strawberry plants, inflicting the “wounds” a few days before harvesting. They found that the plant responded with a higher accumulation of phenolic antioxidants in their fruit.

'Our team has elucidated a controversy that was an open question for many years,' Cisneros-Zevallos continued.

'Understanding how these antioxidants are produced by a simple stress like wounding can certainly transform the way the fresh produce industry operates, including both organic and conventional.

“And it may allow the industry to adopt novel tools based on pre-harvest stress to favour the accumulation of healthier antioxidants in fresh produce and processed foods.'