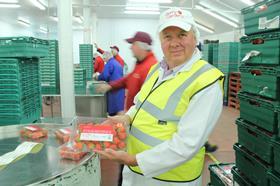 Some companies find their USP through specialising in a niche offer. Not so Berry Gardens, whose position as one of the UK’s largest produce companies, and one of the leading berries suppliers, provides enough might to support an ‘access all areas’ berry marketing strategy.

It’s a strategy that is working well: the company’s 2013 turnover was £206 million, and this rose as much as 16 per cent to £241m in 2014, landing it a top-10 spot in the FPJ Big 50. Established in its present form as an in-house marketing company in 1995, Berry Gardens’ financial model is one fit for the “new world”, according to managing director Nick Marston, as any surplus in profit is redirected back into the supply chain through an annual rebate to growers.

But direct financial support is far from the only way the company is serving its members. Its future strategy focuses strongly on all aspects of berry marketing, from a range of
pack sizes, a portfolio of available varieties, and active routes into several markets.

“An important part of our strategy is to look at how else can consumers buy berries,” says Marston, who has headed up the company since its inception. “Berries aren’t quite suitable for mainstream foodservice operators, but we access high-end catering and restaurants through specialist distributors on the wholesale markets.

“We supply the processing sector, who provide prepared fruit or fillings for tarts, and this is about the same percentage of turnover as organics – about 1.5 per cent. We also supply the Fruit for Schools scheme through wholesalers.

“Quite a lot of these areas are ones we concentrate hard on, as they represent a genuine incremental sales rise. Together they might represent around eight per cent of sales, and you wouldn’t get many businesses turning their nose up at an eight per cent sales increase.”

Multiple markets require multiple packaging formats, and through its newly-expanded central packhouse, Berry Gardens has been busy developing its range of packing sizes. From 750g packs of strawberries, to convenience snack pots of blueberries, Marston believes complexity is where the packing trend is going, so berries can be presented to customers in as many ways as possible.

“There is a trend to offer more complexity on pack sizes, to offer consumers exactly what they want,” he says. “Historically, retailers would offer strawberries in 400g, but now they might also offer them in 650g or even 700g formats.

“There is also a move towards greater differentiation in terms of tiering, varieties and mixed packing formats.”

It is a different story to the tale from retail commentators in recent months, who claim major multiples will be looking to reduce SKUs to meet costs and compete with discounters. But for Marston’s customers at least, innovation is still on the agenda and the company is actively seeking out new ways to present berries in formats most suited to consumers’ varying lifestyles.

Through its partnership with breeding giant Driscoll’s, Berry Gardens also has varietal development high on its agenda. Although members do have the exclusive right to Driscoll’s varieties, they are not restricted to these and are free to trial and select varieties that most suit their operations. As such a trial site at one of its largest growers, Clockhouse Farms, is currently testing a large range of Driscoll’s, East Malling, and other varieties from Spain or Italy, that are either at an advanced selection stage or are already commercially available.

On strawberries, Marston points out that June-bearing strawberry variety Driscoll’s Elizabeth, and everbearer Driscoll’s Jubilee, both have the potential to replace traditional varieties in the premium tier, with a sweet flavour, and large, firm fruit. Elsewhere, standard June-bearer Driscoll’s Rosalie is being touted as a possible replacement for industry staple Elsanta, as improving the standard-tier offer is a key part of Berry Gardens’ strategy on strawberries.

“June-bearing strawberries still represent two-thirds of UK production, as they have a fast-production curve that peaks around the middle of June – coinciding, of course, with the Wimbledon tennis tournament,” says Marston, whose passion about the growing and varietal side of the business is evident as he leads the tour of the trial site. With 62 per cent of the total UK production volume for multiple retailers in 2014, Berry Gardens’ strategy on raspberries is to build on this platform and develop both the standard and premium tiers. Driscoll’s Maravilla and Riviera will be the driving varieties, with an increased focus on counter-season production in Morocco and South Africa through Haygrove’s South African subsidiary Haygrove Heaven, to provide retailers with a strong year-round offer. Marston is particularly proud of the 20 per cent growth in last year’s counter berry season, compared to 17 per cent on the relatively more mature UK season, which he plans to build on through developing links with growing regions such as Agadir, in Morocco, as well as Portugal, Mexico, Spain and South Africa.

What does the future hold for Berry Gardens? Marston says the company is looking to work with growers to create five-year plans and address grower profitability, and secondly, he plans to look for more opportunities within the market using the European fruit and vegetable programme. “As a scheme this has been very successful – it was a move to redirect funding from intervention and market support to encourage and improve production, and align it to the needs of the market,” he explains. “For instance, it was able to help growers fund table tops. We are part way through a funding cycle at the moment. Normally they last between three and five years.

“There is definitely still room to grow the UK market, whether on availability, or eating quality,” he adds.

• Established as a grower
co-operative in 1972