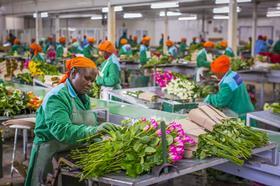 The Kenyan flower industry has returned to 85 per cent of pre-coronavirus levels following the easing of lockdown in Europe, according to the Kenyan Flower Council.

Kenyan farmers had no choice but to throw away millions of roses in March when airfreight services were significantly reduced and events such as weddings and funerals were postponed. But according toReuters, the Kenyan Flower Council is hoping for a full recovery by next year.

'We are better than we were two months ago, demand is almost at 85 per cent,' Tulezi toldReuters. 'From our major markets in Europe and elsewhere, we are seeing orders.'

Located on the equator and along Africa’s eastern coast, Kenya exported an estimated US$5.1bn worth of products around the globe in 2018.

In cut flowers, Europe makes up almost 70 per cent of Kenya's exports but the coronavirus pandemic halved daily orders. Britain is the second largest export destination for the county’s cut flowers after the Netherlands, taking nearly 18 per cent.

Inder Nain of the Kenyan supplier Xflora group toldReutersthat his company used to export 350,000 roses a day but in March that dropped to just 50,000 a day. Now, it has returned to about 250,000.

Despite this, Kenyan flower exporters remain concerned about the high freight costs resulting from a drop in airfreight traffic, while also fearing a second spike of coronavirus in Europe.

'We are still throwing some flowers away but it's quite different from when we were throwing every stem,' Nain toldReuters.'We hope by February the disease will be controlled and things will return to normal.'