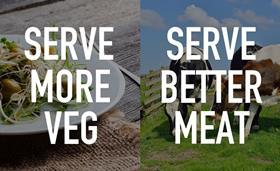 The Sustainable Restaurant Association has urged the foodservice sector to take part in a campaign to serve up More Veg and Better Meat.

Increasing concerns about health and the environment, in combination with rocketing consumer demand, has prompted the month-long campaign, which is described as an opportunity for chefs and operators to develop new, plant-based dishes.

It has already been embraced by a number of well-known culinary figures, who have welcomed the challenge.

Hugh Fearnley-Whittingstall, of the River Cottage restaurants and cookbooks, has spoken in support of the initiative: “I believe this approach is crucial for our health and the health of our planet and that’s why I’m right behind the SRA’s More Veg & Better Meat campaign. At River Cottage, we’ve always celebrated fresh, seasonal produce, and glorious, generous vegetables are the very heart andsoul of our cooking. The idea of using less meat, and only meat with the very best provenance, is a natural complement to this.”

Another chef backing the campaign is Sam Clark, who changed the menu at his restaurant Moro so that the Mixed Vegetable Mezze was switched to the top, prompting an increase in sales of the dish by 25 per cent. He spoke of the role of chefs in encouraging their customers to eat more veg: “Psychologically, people see it sitting proud at the top of the menu, rather than at the bottom as some sort of afterthought. The other big thing is that once a few people start ordering it, others see it coming out of the kitchen and think ‘wow that looks amazing'.”

The UK population today is composed of nearly 50 per cent flexitarians - a clear sign that this initiative could really be embraced in the current foodservice sector. One radical response to the initiative has been the opening of the restaurant Root, by Josh Eggleton, of the Michelin starred restaurant Pony & Trap, and SRA director Amelia Twine. The restaurant’s ten main dishes are all designed around one specific vegetable, and customers can choose between five meat and fish dishes to add if they want.

Eggleton said of the initiative: “It’s astronomical the amount of things you can do with veg. I’ve always liked dishes that focus on one main ingredient, so we’ll be doing that with these small plate dishes – using fabulous fresh produce like the best carrots or cauliflower and creating dishes around them. There’s nothing like restricting the menu to make a chef even more creative!

'We’re not the first to put veg at the heart of the menu – I mean Bruno Loubet’s been doing it at Grain Store for a while now. Just having meat and fish on the side will get people thinking and realising that they don’t need meat with everything to make a delicious meal.”

The campaign has motivated all kinds of foodservice opportunities, from the success of Pret A Manger’s purely vegetarian stores, to the design of an entirely new menu at former International Sustainable Restaurant of the Year, Les Orangeries in Lussac les Chateaux.

Patron Olivia Gautier and chef David Royer, of Les Orangeries, have created an entirely new ‘Hedonistic’ menu inspired by the SRA scheme, containing a higher portion of vegetables. It will sit between their main house and vegetarian menus, with the portions of meat reduced to 80g from their usual 130g.

Gautier described the menu: “We don’t want our customers to see this as painful or a punishment but for them to have a new taste adventure and have something they can feel good about. If people still want to eat meat and fish we want them to enjoy that pleasure but just have a little bit less.”