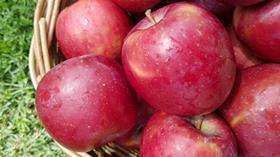 The organisation has called on supermarkets to get behind homegrown top fruit this year, as well as help growers by changing fruit specifications, following some hail and frost issues, to ensure every apple can pear can be sold for a fair return.

BAPL said a challenging start to the season with a wet winter followed by late frosts and hail in some areas is likely to produce a lower overall number of fruit that are larger and full of flavour.

Recent warm weather with welcome rainfall in most areas has delivered improved apple size and flavour, according to the latest update from UK apple growers. “The warm weather at pollination creates greater cell division,” explained BAPL executive chair Ali Capper. “As a result, we’re expecting this season’s apples to have a really good flavour, and we’re also expecting the fruit to be a little larger too.”

Growers have been hard at work walking every orchard, measuring fruits to produce accurate crop estimates.Thinning teams have already reduced crop loading where necessary and removed damaged or imperfect fruit.

BAPL said growers are hoping that British retailers will step up to support the sector this year, with amended specifications, returns that reflect increasing costs, and in-store activity that launches the British apple and pear season with a fanfare from Monday October 5th.

A recent report by Andersons Consulting, revealed that wage increases and Covid-19 costs are adding 13p to 14p per kg to grower costs of production.

According to BAPL, topfruit are some of the most environmentally sustainable in the world – growing in a maritime climate, they use less irrigated water than in many other apple growing regions in the world, they ripen more slowly and taste delicious. Worker welfare standards and pay on UK farms are also among the highest in the world.

“It has been a particularly testing season so far, however our members are growing in optimism,” stated Capper. “Raymond Blanc has signed up to support British apples and pears this season and will be at the heart of our promotional campaign this autumn and winter. We hope that every retailer will get behind their British growers this year with strong promotional support and returns that reflect increasing grower costs.”