‘Lines are blurring between grocery and foodservice’ 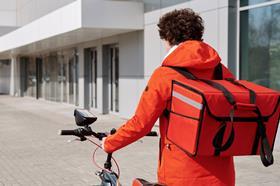 Supermarket home delivery is something we’ve all become very accustomed to, and it’s easy to see why – determining the delivery date and time slot for your weekly shop is the ideal convenience for fitting in with our ever-busy lifestyles.

In addition to their convenience, these delivery services are also typically defined by their uniformity. That is, the experience offered by each grocery retailer is largely very similar with the customer journey following an almost standardised process.

More recently, a growing trend has seen retailers offering consumers an extra layer of convenience by enabling certain grocery items to be delivered within minutes as part of a much faster, ‘on-demand’ service. This new model has not yet brushed aside the more traditional home delivery service (for now at least), but certainly seems to be gaining traction among consumers.

In addition to simply offering a much faster service, the rapid delivery model also seems to be differentiated by another core characteristic – a variety of logistical processes with different retailers fulfilling their on-demand service through varying delivery partners and technology platforms. Of course, this is by no means a bad thing; it simply shows that the underlying technology to prop up such instantaneous delivery is evolving at serious speed.

A handful of supermarkets are offering rapid delivery services through their own channels, often via smartphone apps that are branded to sit firmly under the parent company name. Other retailers, however, are embracing working alongside delivery providers more commonly associated with the foodservice industry.

Interestingly, such partnerships are often actively promoted by retailers, keen to publicise their connection to such ‘foodservice-associated’ delivery partners, many of whom are now household names in their own right.

As an additional observation, these two camps ­– those that facilitate their own on-demand delivery and those that utilise third party partners ­– do not seem to operate with mutual exclusivity. In fact, a number of grocery retailers are happy to offer their own fast-track services in addition to working alongside third parties.

Retailers offering their own rapid delivery services seem to currently be in the minority. Last year, Asda announced the launch of its one-hour delivery service; Sainsbury’s is running its ‘Chop Chop’ app; while Tesco is also offering an app called ‘Whoosh', both of which are fully branded as part of Sainsbury’s and Tesco respectively.

These same three retailers are also making additional use of third-party partners for rapid delivery. Asda is working alongside Just Eat, Sainsbury’s is working with both Uber Eats, and Deliveroo and Tesco have launched a trial with a delivery app called ‘Gorillas'. Retailers who are leaning more fully towards third party on-demand partners include Co-op and Morrisons who are both currently working with both Deliveroo and even Amazon Prime.

Perhaps more significant than simply offering consumers an extra tier of convenience is the effect these partnerships may have in blurring the lines between the foodservice and grocery industries – particularly in the eyes of the consumer. The idea of on-demand order fulfilment has in itself been a defining characteristic of the foodservice industry. Furthermore, consumer perception as to what types of products constitute ‘grocery’ or ‘foodservice’ items may also be shifting. As a quick example, a friend of mine recently hosted dinner for a number of us and needed to get a dessert delivered quickly. Via either Uber Eats or Deliveroo, the chosen cheesecake quickly arrived as a lone item from Sainsbury’s. From the consumer perspective, was this perceived a foodservice transition or grocery purchase?

Numerous foodservice restaurant chains would no doubt offer cheesecakes, ice cream or other similar dessert items. In this case, the supermarket branded packaging may be the only element to mark the consumer experience as being linked to a grocery retailer.

More importantly still, does this in any way hamper the ‘foodservice experience’ for the consumer? Does a cheesecake that arrives as a dessert option from a pizza chain, for example, feel more special or differentiated for consumers than what may essentially be the same product arriving from a supermarket?

In short, how much of the grocery or foodservice experience remains tangible and how much of it remains a branding exercise? A key distinction will largely relate to food that requires any additional preparation at home, once delivered. But for grocery items that are ready to consume on delivery, the distinction is less clear. This will largely apply to non-heated items, but there are a number of heated products that can also delivered by supermarkets, fully prepared. For example, even back in 2018, Asda announced a trial service to offer freshly-bakes pizza to customers via Just Eat.

Andrew Kenny, managing director UK at Just Eat, commented in December on their partnership with Asda. “We live in an on-demand world, and as the UK’s largest food delivery aggregator, we want to ensure we are getting our customers the food they want, when they want it,” he said. “Our tie up with Asda means we can help people access everything from store cupboard essentials to fresh groceries in a matter of minutes. It’s a really exciting development and we look forward to working with Asda on what will be a popular addition for our consumers.”

More recently still, we have also seen growing attention around apps and brands that aim to focus purely on the ‘rapid grocery market’. Such providers are neither large, established supermarket chains, nor are they using well-established delivery providers. Instead, they are carving out a new path offering the full rapid grocery experience under their name as part of less fragmented, more unified and cohesive approach. Contemporary apps such as ‘Zapp’, for example, have been noted for successfully attracting significant levels of investment in relatively short timeframes.

So what does this mean for packaging?

Grocery items will be identical whether purchase in store or via an on-demand delivery app. As such, differentiated packaging seems unnecessary. It’s also worth considering that in the consumer mindset, these products might not have to try to be seen as more ‘foodservice’ to succeed via on-demand delivery. Rather, the consumer may already be altering their perception of what ‘foodservice’ is and grocery branded items are now perfectly acceptable to fit in with that overall consumer experience.

It may be the case that the only packaging adaptation needed from grocery retailers might be to ensure packaging is sufficiently robust to withstand additional delivery and arrive to the consumer in ideal condition.