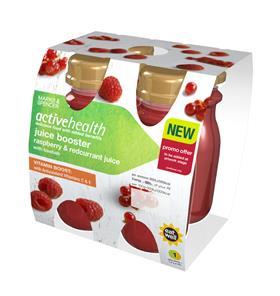 M&S claims that it is the only own-label retailer on the high street using baobab,which myriad 'foodies' are predicting to be the number one superfood for 2015.

Each 150ml bottle counts towards one of your 5 A DAY and sits in the retailer's Eat Well range.

Pronounced ‘bey-oh-bab’, the superfruit is grown in Africa on the baobab tree, the national tree of Madagascar.

Its flavour can be described as somewhere between grapefruit, pear, and vanilla.

It has been named a superfruit due to its nutritional benefits, including:

M&S product developer, Jenny Rea, said: ‘Based on juice shots called ‘elixirs’, discovered during inspiration trips to LA, San Francisco and New York, the new juice boosters are all about getting one of your 5 A DAY in an easy and convenient way.

'The multi-pack format means that you can pick up a pack and kickstart your day every morning.'