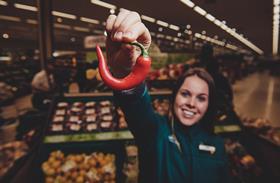 Morrisons is increasing their wonky fruit and veg range by 50 per cent, rolling out 33 misshapen varieties, with a TV campaign promoting irregular produce.

Britain’s fourth largest retailer said they “have listened to customers” and will combat food waste through the new range which includes wonky strawberries, grapes and avocados.

The company also made supplier commitments to buy whole crops from farmers on nearly 300 farms by 2019.

The latest wonky product to hit Morrisons shelves this week is wonky chillies, which taste the same as standard chillies but have visual blemishes or defects, including missing stalks, extreme curvature or imperfect colour.

Drew Kirk, fruit and veg director at Morrisons said: “We have listened to customers who have told us they want to be given every opportunity to reduce food waste. So we’re providing a much bigger choice of naturally wonky or blemished products - so everyone can be involved in reducing waste and afford to eat more healthily.”

To offer a wider seasonal variety of naturally wonky products, Morrisons is going to source from nearly 500 British and overseas farmers.