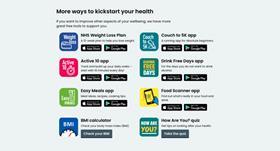 A new campaign has been launched to encourage adults across the nation to lose excess weight, eat more healthily and get active this summer.

Public Health England'sBetter Health campaign offers free evidence-based support and guidance to those working towards a healthier weight. There are a variety of NHS-endorsed apps which will help people to introduce changes to eat better and get active this summer, including the newly updated NHS Weight Loss Plan app.

New research, due to be published shortly by PHE, suggests that those who used and followed the NHS Weight Loss Plan app over 12 weeks, reported a loss on average of almost a stone (5.8kg).

The move follows a nationwide survey of over 5,000 adults which revealed that over four in 10 (41 per cent) of adults in England say they have put on weight since the first lockdown in March 2020.

The new insights show the extent that lockdowns have impacted people’s eating and physical activity habits. Unhealthy eating habits, like snacking and comfort eating, were reported as the main contributor to weight gain during the pandemic for nearly half (46 per cent) of those who reported gaining weight.

A high proportion (89 per cent) of adults who said they gained weight since March 2020 said it was important for them to introduce new healthy habits this summer, with nearly half (49 per cent) saying they would like to have a healthier diet. Half of adults (53 per cent) feel optimistic about making the changes they desire, and a majority (57 per cent) would welcome more advice on eating more healthily, ideas for doing so on a budget, and ideas for exercise routines.

Public health minister Jo Churchill said: 'The pandemic has been hugely challenging for everyone and it has upended our daily routines. As we build back better in the months ahead, we want to make it easier for people to adopt a healthier lifestyle that works for them.

'The brilliant Better Health campaign returns today and provides a wide range of tools – including an easy-to-use phone app – to support people, whether that’s losing weight, sharing healthier recipes or motivating people to be more active.

'Our new Office for Health Promotion is going to keep building on the success of this campaign, helping people to make lifestyle choices that improves both their mental and physical health.'

As part of the campaign, TV presenter and actress Linda Robson has talked about her experience with weight gain and unhealthy habits over lockdown. Having gained some weight since the start of the pandemic, Robson is looking to eat more healthily with the help of the Better Health apps.

She said: 'I can definitely relate to having slipped a bit during lockdowns – in fact I actually gained over a stone myself! People shouldn’t feel guilty for having put on weight, especially after the year we’ve had – we’ve all had to just try and get through it the best we can. However, this summer I want to get my health on track and look to lose some weight. I know it can feel hard, but the Better Health apps are a great place to start, I’ve started eating some of the Better Health recipes – they are dead easy to do and taste great.'

The upcoming launch of the new Office for Health Promotion in autumn will lead national efforts to level up the health of the nation by continuing to support people living with obesity, supporting mental health and promoting physical activity.