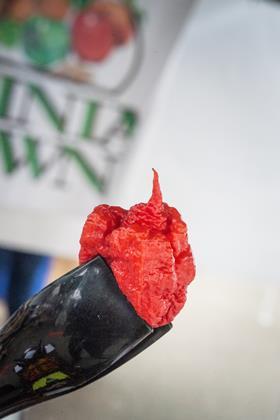 The Carolina Reaper has retained its crown as the world’s hottest chilli pepper from the Guinness World Records, after beating it's previous spice record.

The chilli was cultivated by South Carolina’s Smokin' Ed Currie, notching up peak spice levels of over 2,189,000 scoville heat units.

For context a Jalapeno has around 8000 scovilles, while standard grade pepper spray unleashes up to 5million.

The Carolina Reaper was reconfirmed by Guinness following a stringent round of lab tests, as well as stiff competition from other competitors. It's low spice average, of 1,641,000 scovilles was over 71,000 scovilles hotter than its previous groundbreaking 2013 record.

“What they do is take a 10 pound sample of the chilli and freeze dry it for 96 hours. Then they grind it, including the stem, and that gets piped through the HPLC machine (High Powered Liquid Chromotography),” said Currie.

“I wasn’t confident of the record, as there other several other very good breeders. But I love the hot stuff. My wife calls me crazy. I love the endorphin rush, it’s all fun.”

Currie’s latest concoction, tagged “Pepper X” has been tipped to take the record later this year, with claims that it reaches 3million scovilles.

“We’ll put in the data from the 2017 grow, and at this point it looks like we’ll be providing the pepper to Guinness in about 60 days,' said Currie.