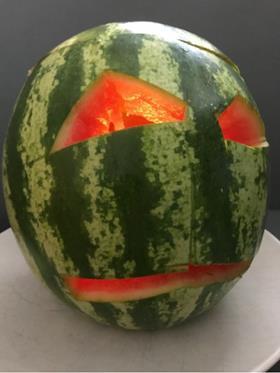 Watermelons and turnips, among other fruits and veg, could make great alternatives to pumpkins this halloween, says GardenBuildingsDirect

With some experts in the news predicting a shortage of pumpkins this year, it has raised a debate about how best to celebrate Halloween.

Early forecasts have already made UK headlines suggesting there could be fewer pumpkins this season due to supply issues and poor weather for crops. Over the weekend in the US, it is being reported pumpkin prices are increasing to reflect the difficult harvest in prospect.

Whether or not these concerns come to pass, experts at GardenBuildingsDirect.co.uk say it is a good time to consider other creative ways to enjoy a memorable and spooky Halloween by looking at other fruits and vegetables alongside pumpkins.

A spokesman for GardenBuildingsDirect.co.uk said: “While it might be too early to predict how abundant pumpkins will be this season, it raises a good opportunity for people to consider exploring other ideas to decorate their homes and gardens this Halloween.

“In the 19th century, people used to hollow out turnips into lanterns or carve them with scary faces particularly in the Scottish Highlands and parts of Ireland to celebrate Halloween, and there are many other fruits and vegetables to be considered alongside pumpkins to add variety to your Halloween display.”

Recent news reports suggest there could be fewer pumpkins available because bad weather has failed to ripen crops so the squash has suffered from a lack of sunshine and heat. Recent weeks have also seen some supply issues for different goods at supermarkets.

Even if these fears are not realised, Halloween fans can still consider carving other fruits and vegetables alongside pumpkins to further enhance to their spooky collections. Here are some ideas from the experts at GardenBuildingsDirect.co.uk:

Pineapples – these can make scary faces which compete with pumpkins when carved and lit up from the inside. The green leaves at the top add to the horror look.

Oranges – similar in colour but clearly smaller than pumpkins, oranges can still be carved into effective lanterns or spooky faces.

Watermelon – appealing because of its similar size to a pumpkin, these fruits can make effective decorations with their ghoulish green exterior and pinky red insides signalling gore!

Avocados – these can make absorbing looking faces particularly when carving to the centre of the green fruit to display the brown stone inside.

Turnips – recreate and celebrate the past by turning your humble turnip into a Jack-o’-lantern.