Packaging waste is a 'growing priority' 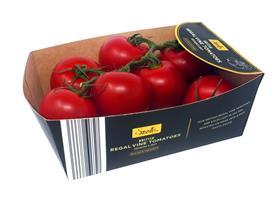 Thank you for nearly ruining a child’s Christmas.” This was just one of the angry tweets directed at Amazon recently after the online retailer sent out Christmas presents without cardboard wrapping to disguise the gifts.

Accused of using too much packaging for its deliveries in the past, the online retailer has started to cut back on the amount of cardboard it uses. But now it has been accused of going too far, sending some items with no additional packaging whatsoever. Parents are fuming, children’s Christmas surprises in tatters.

While this may seem like a silly mistake from the retailer, there is also a sense that Amazon can’t do anything right – ultimately the environment might be a bit more important than a child’s Christmas surprise. Fortunately, in fresh produce there isn’t the same potential for ruining surprises, with companies far more likely to be shamed for overpackaging than cutting back – as demonstrated by the social media mockery, and subsequent ditching, of Whole Foods’ pre-peeled oranges last year.

As it stands, retailers are finding it hard to decide what they want from their packaging, according to one industry insider. “One minute they’re worried about product damage; then they worry about making the bags thinner and saving on material to be more green; and then they want to put produce in premium bags because it sells better,” he says. “Supermarkets’ priorities change constantly, but that’s retailers for you.”

Despite this alleged indecision, Andy Beal of Gainsborough Industrial Controls, insists that tackling packaging waste is a growing priority for the major retailers. Beal, whose Lincolnshire-based company manufactures fill and seal packaging machines, predicts a “step change” in focus from premium packaging to environmentally-friendly options in the next five years. “The big push coming up will be recyclability,” he says, “and I get that because we’ve got to cut down on packaging waste.”

While the issue isn’t new, with no shortage of calls for more sustainable packaging over the past decade, it is only recently that supermarkets have started to show more commitment to tackling the problem. This year, among other environmentally-friendly innovations, Tesco trialled pulp punnets for mushrooms, M&S launched avocados with laser labels, and Waitrose tested tomato trays made from dried tomato leaves and recycled cardboard.

The main problem, as recently highlighted by former Asda boss Andy Clarke in The Guardian, is plastic – far too much of it is still used in supermarket packaging, and even if it can be recycled, it often isn’t. In October Clarke called for supermarkets and the packaging industry to work together to stop using plastic packaging. “Regardless of how much is invested in Britain’s recycling infrastructure, virtually all plastic packaging will reach landfill or the bottom of the ocean sooner or later,” he told the newspaper. And consumers appear to be with him on this – a recent survey by campaign group A Plastic Planet revealed that nine in ten Brits want supermarkets to introduce a plastic-free aisle.

Faced with these calls, Neil Goldman, the managing director of food packaging designer and manufacturer Colpac, says his business has “taken the time to fully understand the challenges and properties of paperboard material”. Introducing it has been challenging due to the nature of the material and supply chain conditions, he says, but in a push to become more sustainable, the manufacturer has expanded its range of paperboard packaging, overcoming issues surrounding moisture to help eliminate waste at source.

When it comes to food-to-go packaging, a market in rapid growth, a degree of compromise is needed, says Goldman. Plastic lids or ‘anti-mist windows’ are combined with biodegradable paperboard in many of Colpac’s salad boxes, fruit pots and sandwich packs, allowing time-poor consumers to quickly see the product and gauge its freshness when deciding what to choose for their lunch.

“Compromising a paperboard base and plastic lid with anti-mist properties, enables foodservice operators the ability to pack food quickly, while the clear lids gives customers the fresh visibility they crave,” Goldman explains. But careful work has been needed to develop paperboard that is durable and resilient to absorbing dressings and sauces.

Another company nearer the beginning of the chain that is doing its bit to tackle material waste is Pooling Partners. The Dutch firm provides pallet and box pooling services across Europe and is also one of the continent’s largest producers of wooden pallets. Director Philip Storer sees the sharing of pallets, trays and containers as an important tool in the war on waste, and he is confident that reusable packaging losses will reduce as accountability is enhanced.

“Packaging will become increasingly smart in a technological sense as tracking and traceability willensure greater integrity across the supply chain,” he predicts. And in fresh produce logistics “we will continue to see designs that improve the reverse logistics of reusable items and reduce wastage,” he says.

Retailers are beginning to experiment more with the handling items they use, testing out new pallets and crates to transport their produce. But as the range of packaging and handling options proliferates, there is also a risk that this will limit potential for sharing.

Packaging, of course, isn’t just about the aesthetics or sustainability, and plays a crucial role in extending shelf life and reducing waste.

From a green perspective, it is encouraging that in his Autumn Budget Chancellor Philip Hammond called for evidence on how taxes and other charges on single-use plastics could be used to limit their impact on marine and bird life. This will presumably put renewed pressure on supermarkets to switch to more sustainable options. But as it stands, there still seems to be some indecision about what the priorities are and what they ought to be.