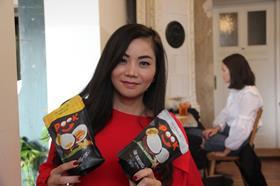 Breaking into the fresh produce business isn’t easy whoever you are, but as a Thai woman trying to make it in the notoriously competitive German retail market, it’s fair to say the odds were stacked against Kanokporn Holtsch when she launched Pook Toasted Coconut Chips back in 2016.

“Women in the food business face big challenges,” she says. “The vast majority of people in the food business are men, and if I go to a fair or a meeting with a male colleague, people always talk to him first. Men don’t really talk business language, they talk man language. As a woman, you have to be tough and you need a lot of energy.”

Energy is something that Holtsch has never lacked, having come up with the original design for her brand, launched a website and applied for a trademark all within the first week. The healthy Thai coconut chips, which are now available at a wide range of German retailers – including Edeka, Rewe, Kaufland and Netto – come in three flavours: Original Sea Salt, Mango Sea Salt and Chocolate Sea Salt. In 2018 the brand also launched Sticky Rice Chips, a Thai favourite, with a choice between mango, sea salt and sriracha seasoning.

“Three years ago, there were no coconut chips like mine – just ones made with dried coconut,” says Holtsch. “We toast the coconut to make it crunchy, and we try to only use natural ingredients. In the original flavour there are only three ingredients: coconut, sea salt and a bit of sugar.”

With coconut on trend thanks to its various health properties, she can see a strong future for the product, which can be used as a topping on cereals, yoghurt, desserts and soups, as well as being enjoyed as a snack. When Holtsch moved to Germany 13 years ago, she recalls that it was hard for her to find vegetarian food, but now she sees it everywhere, and she wants to be part of that trend.

Holtsch explains that winning the Fruit Logistica Innovation Award in 2018 helped her to secure listings at both Edeka and Rewe, and her 2018 success on the German equivalent of Dragon’s Den, The Lion’s Den, led to a €200,000 cash injection from German investor Ralf Dümmel in return for 20 per cent of the business. Immediately after the show, the brand sold 1.6 million bags in Germany alone. Holtsch also exports her products to Belgium, Switzerland, Romania, Portugal and Iceland.

Going forward, Holtsch sees the biggest sales potential in Europe, particularly in Germany and Switzerland, where Pook is trying to build sales. The Thai entrepreneur explains that the German retail market is tough to crack since consumers are discerning and want good-quality products at low prices. Research has shown that more than 85 per cent of German consumers look at the ingredients list on the back of the packet before buying a new product, so using natural ingredients without E numbers or additives is important. “The German people know how to spend their money and they need to know about you before they spend money on your product,” says Holtsch.

Despite how difficult it can be to secure a supermarket listing in Germany, she says it is even harder to hang onto it. “German supermarkets are very good,” she says.“They try to support you; they have meetings with you; they talk to you about what kind of activities you can do to push the sales. But if they’re not happy, they can just kick you out because there are so many other products that want to come in. In healthy snacks there’s lots of strong competition.”

With this in mind, it’s not surprising that the drive to limit the use of single-use plastics is front of mind for the Thai businesswoman. She says it will be possible to switch the packaging used for Pook’s Sticky Rice Chips, however the same isn’t necessarily true for its Toasted Coconut Chips, since they need to be kept fresh for longer. “We don’t produce them here in Germany and we need a shelf life of at least one year,” says Holtsch. “It’s scary for me; some customers have come to me and asked why I need to use the packaging I do.”

Leaving packaging concerns to one side, there are plenty of reasons to be hopeful, however. Holtsch plans to launch more ready-to-eat vegan snacks in future, and she is targeting Scandinavia and the UK as interesting markets to explore. Above all, she wants to make healthy food tasty and introduce European customers to more Thai snacks – “Pook is a German brand, but we sell Thai products – that’s our image, that’s our signature,” she says.

Ultimately, her aim is to make Pook one of Germany’s best-known snack brands, a tough ask in a market dominated by confectionary giants, but her drive is such, you wouldn’t bet against her. “If you have an idea, you just have to go for it,” she says. “If you wait, someone else will get there first.”