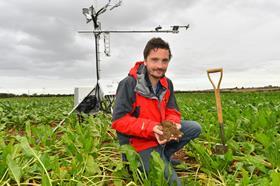 Dr Iain Gould from the University of Lincoln

With climate change affecting the health and productivity of agricultural soils, a research project led by the University of Lincoln is exploring how the microbes in soil can ‘learn’ to adapt to increased salinity caused by rising sea levels.

Coastal areas are highly productiveagriculturallyand where some of the UK’s most valuable crops, such as potatoes, are grown. It is a concern, therefore, that rising sea levels and increased droughts due to climate change will increase the salinity of soils in these areas, potentially damaging crops.

An increase is soil salinity stresses soil microbes and harms the overall health of the soil, which can ultimately result in decreased food outputs. Researchers pointed out that this could mean food becomes scarcer, prices rise, and that there could be an increased reliance on importing food with a greater carbon footprint.

Professor Matthew Goddard, from the University of Lincoln, said: “With the world facing unprecedented rises in sea levels and global temperatures, the agricultural industry will need to adapt and respond to shifting circumstances.

“Saltwater contamination is hugely problematic for soil degradation and decreases crop yields, especially in dry areas. If the microbes in soils can learn to tolerate increased salinity through gradual biological processes, growers may condition soils to remain fertile.

“This process will simultaneously increase food supply and reduce agricultural freshwater use, especially in dry periods.”

Dr Iain Gould, senior lecturer in soil science at the University of Lincoln, added:“The idea of this research is to see if soils can adapt to higher levels of salt in climates where irrigation water is becoming increasingly saline.

“By doing so, we hope to improve the resilience of some of our most productive soils to ensure a stable supply of food throughout the UK and further afield.”

The projectwill involve the Lincolnshire community by working with local agricultural companies, and the region will act as a testbed to explore various global challenges around sustainable agriculture, climate change and food security.

The University of Lincoln is working in a consortium with the Norwegian University of Life Sciences and the National Institute for Agrarian and Veterinarian Research in Portugal. The research has received funding in the UK from the Biotechnology and Biological Sciences Research Council.

Part of theEuropean Joint Program in Soil, the projectis titled ‘Preadapting soil biology for increased tolerance to elevated salinities due to climate change’.

The University of Lincoln is home to a centre of international research and facilities, specialising in agri-food science. Research areas include soil management, which aims to support farmers, landowners, and ecosystem managers in developing effective and sustainable approaches to land and water management.