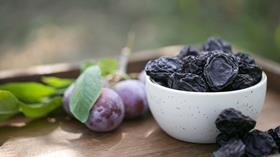 New research from San Diego State University’s School of Exercise and Nutritional Sciences reports that eating prunes daily has a protective effect on bone health in men over 50.

This study is the first of its kind to examine the beneficial prune effect on bones in men. It is estimated that two million men are battling osteoporosis and another 16.1 million men have low bone mass, or osteopenia (Wright et al.). Despite these statistics, bone disease in men is often overlooked.

“We’ve already seen significant evidence that prunes have a positive effect on bone health in women, so it’s particularly exciting to find that prunes can also play a beneficial role in men’s bone health. We look forward to continuing to study the 'prune effect' on bone and other health outcomes in men,” said lead researcher Professor Shirin Hooshmand, PhD, RD, School of Exercise and Nutritional Sciences, San Diego State University.

In this randomised-controlled clinical study, 57 healthy men aged 50-79 years old were assigned to either consume 100 grams of prunes every day or no prunes for 12 months. At the conclusion of one year, the prune consumers showed significant decreases in biomarkers of bone breakdown, while no changes were observed in the control group (Hooshmand, et al. 2021). The study authors also reported the men who ate prunes showed improvements in bone geometry indicating greater bone strength.

Historically, research has focused on osteoporosis and bone health in women, already indicating a favourable bone response to prunes specifically among postmenopausal women. Several studies have suggested that eating 50 to 100 grams of prunes every day could lead to increased bone mass and decreased bone breakdown (Arjmandi et al., 2002; Hooshmand et al., 2011, 2014, 2016). Moreover, a recent case study published in the Bone Reports earlier this year reported that total bone mineral density increased in a postmenopausal woman with osteopenia after she consumed 50 grams of prunes daily for 16 months (Strock, et al, 2021).

Registered dietitian and California Prune Board consultant, Jo Travers, explains: “Bones act as reservoirs for minerals that have many other uses throughout the body, and when these minerals get low, bone is broken down in order to release these reserves. Getting the minerals out of bone is a very quick process, but putting them back is much slower, leading to an overall net loss of bone mineral density.”

Travers, who also authored the book, The Bone-Strength Plan, continues: “Prunes contain some of the key minerals involved in bone health such as vitamin K and manganese. By consuming enough of these minerals in our diets we can negate the need to dip into reserves in the first place, protecting bone mineral density and even allowing new bone growth.”

While San Diego State University’s newest research is an exciting addition to existing prune-focused literature, more investigations into the effect of prunes on human bone health are currently underway. An upcoming study from Pennsylvania State University examines how consuming different amounts of prunes affects health outcomes in postmenopausal women over a one-year period. The study not only explores the impact of prunes on bone health, but it will also look at the prune-effect on inflammation and gut health.