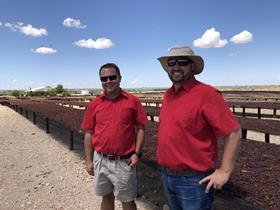 South Africa expects to boost its raisin production to 100,000 tonnes in the next five years as new plantings come on stream and the sector strives for greater continuity of supply.

The South African raisins industry, which last year produced a record crop of 75,000t, is looking to increase export volumes to the UK and certain Asian markets such as Japan and China.

It hopes to increase it this by promoting the country’s high agronomy standards and product quality, which benefits from the consolidation of the sector – the fifth largest in the world.

Currently, South Africa accounts for around five per cent of Britain's raisin imports.

This season is proving difficult for growers who have been hit by unusually high levels of rainfall in the Orange River region of the Northern Cape, which is known for its desert climate and plentiful water supply.

The heaviest rains in the area for six years are expected to reduce production volumes by around 25 per cent, largely due to product losses during drying, although an official estimate has yet to be announced.

The Northern Cape is the country’s largest growing region, producing around 90 per cent of South Africa’s raisins with the Western Cape accounting for the remaining 10 per cent of production.

With only around 1,000 growers, South Africa is dominated by larger farms producing fruit to high standards in an organised and increasingly regulated sector.

This sets it apart from the world’s largest raisin producer, Turkey, which has around 60,000 mainly small producers growing to more variable standards.

One of the key selling points for South African raisins is their low pesticide levels, which is particularly important in the country’s biggest export market, Germany.

German retailers insist on strict standards on MRLs and have been willing to pay higher prices for South African product rather than importing from Turkey, which generally has lower prices but uses more chemicals.

In the UK, Turkey currently dominates supply. It controls around 65 per cent of the market, followed by California which has 15 per cent.

Competing with Turkey on price will continue to be difficult, but South Africa is hopeful it can boost its market share in Britain by focusing on high product quality, traceability, chemical controls and consistency of supply.

As part of this, all South African producers are becoming SA-GAP accredited, an offshoot of the GlobalGAP certification.

Ferdie Botha of South African Raisins, a promotional body that replaced Dried Fruit Technical Services at the beginning of 2019, said: “From a production point of view, South Africa has always been strong in terms of R&D and agronomy.

“We really have a strong commercial production base so I think the next phase is to look at the finer things in terms of marketing our product to the world. We want to tell the story of what we are doing, both in terms of growing and life over here.”

In a fresh push to market the product in the UK and Germany, a delegation of leading UK importers and trade journalists visited the country’s raisin-growing heartland in the Orange River region at the beginning of March.

Healthy snacking is seen as the UK sales channel with the biggest growth potential, but internationally the raisin industry will have to combat misleading coverage on the product’s sugar content and impact on dental health.

Last year, an international body called the Dried Fruit Alliance (DFA) was established to raise awareness of the health benefits of dried fruit and counter claims made in a recentDaily Mailarticle.

Consisting of Whitworths, Sun Maid, Californian Raisin Administrative Committee, the California Prune Board and the UK’s National Dried Fruit Trade Association, it wants to dispel the perception that raisins are bad for dental health, saying there is no medical evidence to suggest this.

An event in 2019 the DFA bought together industry experts to discuss scientific research studies in relation to dried fruit, covering topics such as dental health, eating dried fruit as part of your five a day, gut health and snacking advice.

“Together with the world’s other major raisin industries in California, Turkey, Argentina, Chile and Australia, South African Raisins is trying to world more closely to promote the health benefits and convenience that dried fruit can offer consumers,” said Botha.