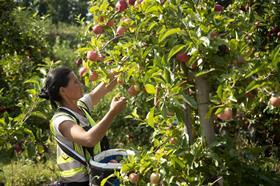 Celebrity chef Raymond Blanc has launched the UK topfruit season, stressing that some of the world’s most delicious apples are British.

Monday 5October marks the start of the 2020 apple season with supermarkets now well stocked with domestic varieties. In 2020, 1.6 billion apples and pears (183,000 tonnes) will be picked by hand in British orchards.

It’s been a challenging season for growers who have had to contend with fluctuating weather conditions and the continuing impact of Covid-19, but the British Apples & Pears (BAPL) trade body said this year’s apple harvest is expected to be “especially delicious”.

Blanc will be working alongside British topfruit growers to fuel consumer excitement about this year's crop.

In addition, Ali Capper, Blanc and a selection of regional growers will take part in a nationwide radio day on Wednesday 7October to talk about the great flavour of British apples and their nutritional benefits, while also offering snacking advice and recipe ideas.

Blanc said: “For me, some of the greatest-tasting apples in the world are British. The start of the season gives us the perfect opportunity to showcase British apples and pears and to talk about the fantastic varieties available right here on our doorstep.

“I am extremely proud to be working alongside British growers. When we remind people of just how wonderful the humble British apple is, I know everyone will be as excited about British apples as I am.”

Blanc’s dedication to British apples led him to plant his own orchard of 2,500 trees in the grounds of his two Michelin Star restaurant and hotel Belmond Le Manoir aux Quat’Saisons in Oxfordshire.

The French chef’s latest bookThe Lost Orchardreveals how he created this orchard and reconnected with various British varieties along the way.

Ali Capper, chief executive of BAPL said:“We believe this will be our biggest start of season campaign yet. Not only are we using Raymond Blanc’s celebrity chef appeal to reach consumers directly on TV, radio and print, we are also working with key social media influencers to get our apple a day message out to as many people as possible.

“There’s no doubt this season has been challenging for our growers. They’ve been working around the clock to overcome the challenges posed by the weather conditions and the impact of the Covid-19 pandemic. However, we’re delighted that the hard work and commitment of our growers is paying off with the most delicious tasting fruit.

“With the support of British retailers, we are excited to announce the start of a wonderful British apple and pear season.”

Over the last three years, BAPL has invested almost £1 million to boost awareness of the health benefits of British apples and pears, encouraging consumers to eat an apple a day and ultimately reach its target of achieving 60 per cent retail market share by 2030.

Apple consumption in the UK has increased during the pandemic, but since the average UK consumer eats less than half an apple a day, there is a big opportunity to increase consumption during this important promotional period.