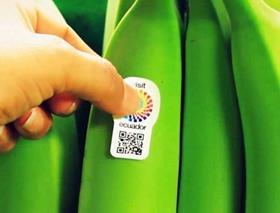 British retailers are exploring sustainable alternatives to plastic packaging used for fresh produce and other grocery items, in a bid to reduce the amount of plastic waste in the supply chain.

According to a new report published by food sustainability charity Wrap,one billion 'problematic and unnecessary single-use' plastic items are set to be eliminated by the end of 2020.

That apparently includes around 137.5 million small plastic stickers, which it said had so far been removed from apples, avocados and other fruit.

The stickers are used to help shoppers identify and differentiate between products– using branding and price look-up codes– and then pay the correct price for them at the till. Importantly, they can also help ensure food safety by allowing contaminated produce to be traced, as well as allowing retailers to gather point-of-sale data.

Instead, cashiers in some stores are now receiving additional training and starting to use cue cards to identify loose produce.

Meanwhile, some suppliers have switched to compostable stickers, and others are looking at laser-branding fruit and vegetables. For example, M&S is considering lasering use-by dates on its avocados.

In June, international fresh produce labelling company Sinclair launched a 100 per cent compostable sticker, called the Sinclair EcoLabel, that it says breaks down within 12 weeks in industrial composting conditions with no adverse effect on soil or plants in the compost.

All the components of the stickers, including the face stock, adhesive and inks, are OK compost and Seedling-certified by TüV Austria.

Sinclair said it was also conducting home-composting trials with the Sinclair EcoLabel in different conditions, it confirmed. However, the temperature in a garden compost heap is lower and less constant than in an industrial composting environment, making the process slower and more complicated.

'Our efforts are and will be, ongoing to offer more sustainable fresh produce labelling options,' said the business, but it added that 'plastics are a part of everyday life and are used to provide protective packaging, food-safety, branding and critical point-of-sale data for retailers and consumers'.

Sinclair also pointed out that fresh produce labels are a 'minimal packaging solution and remove the need for further packaging'.

Efforts from retailers to move away from single-use plastic stickers are part of the UK Plastics Pact, which has been signed by all of the UK’s major supermarkets, as well as manufacturers and other businesses to ditch one billion single-use plastic items by the end of 2020.

According to Wrap’s first annual report on where the Pact’s members stand against its targets,signatories are halfway towards all their packaging being recyclable, and the UK is over halfway towards recycling 70 per cent of plastic packaging.

In addition, members are a third of the way towards an average of 30 per recycled content in their plastic packaging.

Wrap’s CEO Marcus Gover said: “The way that we make, use and dispose of plastic is transforming, and I am proud of the progress that the Pact has made so far. But there is no magic wand – we’re unpicking a highly complex and well-established system and making sure that we don’t simply displace the environmental cost elsewhere.

“Retaining the valuable role plastic packaging plays, especially in preventing food waste, is crucial. We can’t gamble with the climate in our desire to tackle plastic pollution.

“Our Pact members have shown that they’re committed to this challenge and our new report demonstrates the breadth of action so far on tackling plastic waste.”

Various retailers have made bold commitments to reducing their plastics use as they look to fulfil the aims of the UK Plastics Pact.

Tesco has announced it will remove one billion pieces of plastic from its own-brand products in UK stores by the end of 2020. And Sainsbury’s has pledged to halve the amount of plastic used in its stores by 2025, with a focus on fruit and vegetable packaging.

Morrisons has recently rolled out loose fresh produce areas to 60 of its stores where customers can choose from up to 127 varieties of loose fruit and vegetables. It said more stores will follow in the new year.

There has also been an increase in reusable packaging, such as the Waitrose ‘Unpacked’ trial stores providing refill stations for dry goods, wine, beer, and detergent refillables.

In addition,Morrisons and the Co-op have removed unrecyclable black plastic completely from their own brand products.AndM&S is continuing to roll out collection points for difficult to recycle plastic packaging and Tesco is trialling the collection of all types of all soft plastic packaging in some stores.

“These will be our top priorities as we work urgently towards a world where plastic is valued and doesn’t pollute the environment,” he said.