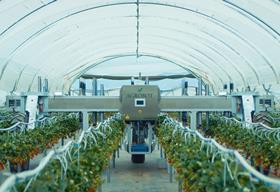 Over the past decade, agricultural robotics has come on leaps and bounds, with growers, packers and retailers starting to use a host of new machines from disease-detecting drones to grocery delivery bots, albeit often on a trial basis.

One of the hardest nuts to crack has been the robotic harvester. In various fruits such as apples, oranges, kiwis and berries, automated picking is now possible, but picking speeds and locating the fruit remain big challenges. Some of the harvesting robots out there are undoubtedly an incredible feat of engineering, however for the time being machines have a way to go before they can match the speed, dexterity and vision of human pickers.

Along with the likes of Octinion, Dogtooth Technologies and Fieldwork Robotics, one company that has been successfully grappling with these challenges is the Spanish start-up Agrobot. Ten years ago, it set about developing a strawberry-picking robot for growers facing worsening labour shortages. The result is a giant steel octopus on wheels, with 24 picking arms that work together to pluck the fruit off up to four rows of strawberry plants at a time. Its giant wheels roll up and down the spaces between plants and Agrobot’s chief executive and founder Juan Bravo insists it can be adapted to any row spacing or farm configuration.

Suitable for both tabletop and open-field harvesting, the robot has been trialled by Driscoll’s in California since 2015, and Agrobot is hoping to launch the technology commercially very soon. “Our technology has been improved a lot over the last ten years,” says Bravo. “We’ve had to change the design many times but we’re now very happy with the latest prototype.”

Like other tech companies in its field, one of Agrobot’s main challenges has been in matching manual picking speeds – not an easy task given humans’ dexterity, efficiency and precision in such tasks. “We kept increasing the speed of our robotic arms until we reached three seconds per strawberry,” recalls Bravo, “but we had to slow this down to one every five seconds because the robotic arm was dropping fruit.”

The average human picking speed in California is significantly faster, at 1.2 seconds a strawberry, but Bravo says Agrobot can compete with humans by harvesting with several robotic arms simultaneously. “Our robots’ arms might be slower but there are more of them,” he says.

Another big challenge is locating the fruit on the plant – something Bravo says has been made much easier by advances in artificial intelligence. “Agrobot can pick up to 80 per cent of the strawberries in the field, sometimes 50 or 60 per cent – it depends how the strawberries are presented on the plant and whether they’re visible outside the canopy.”

Further progress in this area will depend not only on advancing the robot, but more importantly on improving growing practices and strawberry varieties. “We need to adapt the plants to the harvester and the harvester to the plants,” says Bravo. “This will take a few more years because we’ll have to involve more companies and more people.” For the time being, workers are therefore still needed to pick the remaining fruit on the plants, but Bravo says it’s a good start.

Beyond speed and efficiency, food safety is also of central importance. And in order to minimise the contact between the picking arm and the strawberry, Bravo has adapted his robot to pick by the stem – the norm in both the UK and Asia. “This is not only to avoid bruising but mainly for food safety,” he explains. “If the robotic arm is touching one strawberry’s skin after another, the potential for spreading diseases is high.”

When it comes to target markets, he says that along with California, the UK is “very interesting”. According to the NFU fruit picker shortages reached 17.6 per cent in August last year, with the pilot SAWS scheme falling well short of fulfilling growers’ labour requirements.

“I’ve spoken to several British growers,” says Bravo. “We decided not to test the robot there because we couldn’t spread ourselves too thin, but if all goes to plan, the robot should be available there within the next year or two.”

Ultimately, the goal is to develop safe, profitable harvesters not just for strawberries but for other crops too. And amid intensifying labour shortages, funding has been flowing in – initially from Spanish and European grants, then from growers in California and now from “other industry players”.

“Growers really need this kind of technology,” says Bravo. “And we think we’re very close to launching it.”

Picking is only half the battle: you also have to pack, and efforts are being made to automate this stage of the process too. Automating the packing process is tricky in strawberries since unlike apples, soft fruit is very delicate and can vary in both size and shape. One company that could have the answer is Soft Robotics, whose octopus-inspired grasping arms are designed to delicately handle various products of unpredictable size, shape and weight.