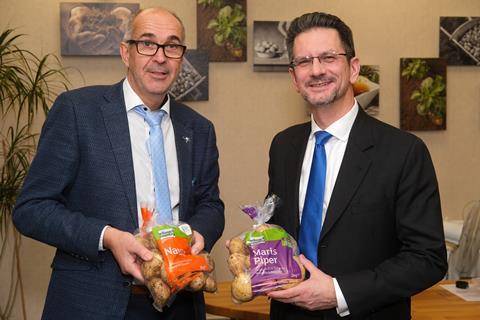 “All the seed potatoes imported into Northern Ireland could remain here for planting purposes,” he said. ”So, there is no reason why this matter cannot be resolved through the Protocol review negotiations, now taking place between the UK and the European Union.”

The matter was discussed in detail with the Minister of State during a recent visit to the Wilson’s Country potato packing and processing plant at Craigavon in Co Armagh.

The minister saw, at first hand, the beneficial impact of recent investment projects and the significant position that Wilson’s Country holds within the industry.

Wilson said: “There is an onus on government to step in and help the potato sector in whatever way it can to ensure a competitive and sustainable industry for Northern Ireland within the British Isles.”

Following his visit to Wilson’s Country, the Minister of State for Northern Ireland commented: “The Protocol is causing serious disruption to NI’s business interests, including within the agri-food sector.

“It is unacceptable that essential goods used successfully in Northern Ireland for generations, like seed potatoes, can no longer reach people in Northern Ireland. Strong and competitive businesses like Wilson’s Country must be helped to maintain the agri-food sector.

“The government is working to safeguard key supply chains like those for seed potatoes from the burdensome and unnecessary application of rules under the Protocol. A negotiated outcome with the EU is our clear preference. However, if we are unable to reach a negotiated solution, our legislation, which has passed the House of Commons with no amendments, aims to restore balance and remove burdensome restrictions such as those blocking seed potato imports, all the while protecting the legitimate interests of the European Union and Ireland.”

Pre 2021, around 30,000 tonnes of UK seed potatoes were imported each year into the EU, principally from Scotland, with a similar amount of EU seed potatoes exported to the UK, according to the British Agricultural Bureau.