Seeds from the North Sea 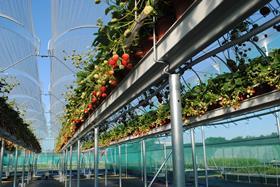 ABZ Seeds is expanding into the fresh market

It’s no secret that berries are on the march. The category keeps posting big value gains, despite its increasing maturity. In the past year berries stole the top three places in biggest value growth and top of the pile were strawberries, enjoying a massive £151million growth spurt. The sheer size of the strawberry market makes it attractive to breeders from the US to mainland Europe, and Britain’s close neighbours, the Netherlands, is one country looking to join in.

“The UK market is a strong, growing market, and is trendsetting in stimulating soft-fruit consumption. For my presentation during Fruit Focus this year, I was thinking about the weaknesses of the UK strawberry sector, but honestly there are not many,” says Flevo Berry commercial director Steven Oosterloo.

“For a strawberry breeding company, we are relatively young. So far we have been mostly active in the UK market with a few selected partners. As of season 2020 we are broadly opening up to all UK growers. The positive point is that, because we are an independent strawberry breeding company, we can be part of any value chain and invite all UK growers to trial Flevo Berry genetics.

ABZ Seeds is another Dutch breeder entering the UK market, with winter strawberry production one area where it feels it can offer big value to these shores.

Paul Masters was appointed ABZ Seeds sales agent for the UK in July, having previously worked in ornamentals. “ABZ has been active in the garden market with a number of varieties but always as ornamental fruit producing varieties,” Masters says.

“There’s been extensive trial work with varieties for the fresh market, particularly developing varieties that can be used in winter production with supplementary lighting and heat. ABZ Seeds has the genetics that it believes are going to give growers the results, and customers the taste satisfaction, they want.

“It has the potential to produce a northern European winter crop that has not been transported from southern Europe or Africa,” adds Masters. “There’s been strong interest and growers are always interested in new genetics that can produce more strawberries for less money. The trials which I have seen have shown good yield and flavour.”

“We are selecting heavily on healthy and robust varieties. This is a key point for the future of the soft-fruit sector. Robust varieties are the solution for the increasing concern of consumers on residues, the environment and biodiversity, whilst on the other hand being able to produce a reliable quality product for the retailer.”

Oosterloo says climate uncertainty is just one of many challenges for breeders, with other obstacles influencing the way breeders like Flevo Berry are approaching their craft.

“First of all, you have the new breeding techniques, some allowed, some not in Europe. This is creating a difference on the worldwide breeding playing field. Secondly, you see that labour is becoming bottlenecked in the industry. That is where you now see a lot of developments – varieties that have low manual picking costs per kilogram of product or good performance on robotic picking. Thirdly, is producing robust varieties that can be grown with less crop protection means and are able to cope with climate extremes.”

For the UK, any list of challenges can be automatically supplemented with an extra headache: Brexit. With the threat of a hard border going up between the UK and Europe still looming, any business with a finger in the British pie must be feeling nervous about events unfolding. But Masters and Oosterloo remain sanguine on the future.

“The thing with seed is that it’s very easily transported,” Masters reflects. “We haven’t got all the issues with soil-borne diseases nor do we have the same issues with perishability that you have with plants.

“I wouldn’t like to say there will be no issues, but the issues are going to impact less than if you are producing and exporting crops.”

For Oosterloo, his faith in the strength of the Dutch breeding industry gives him hope that a no-deal Brexit might be merely a matter of paperwork. “Likely a no-deal Brexit creates extra bureaucratic barriers, similar to other countries outside the EU.