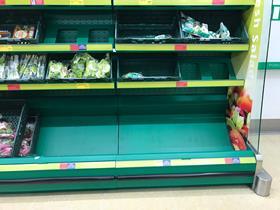 There are concerns of empty supermarket shelves in the produce aisle

British supermarkets could see shortages of salads, brassicas, citrus and soft fruit in the coming days amid major disruption to supply chains in the wake of France’s travel ban.

Lorries cannot cross the Channel via the Eurotunnel or the Port of Dover for 48 hours (from midnight on 20 December) after the French government blocked the arrival of UK freight and passengers due to concerns about the spread of a new strain of Covid-19.

France was not the only country to ban arrivals from the UK, with a number of other European countries including the Netherlands, Italy, Ireland and the Belgium also blocking UK travel.

Around 10,000 lorries a day travel between Dover and Calais at peak periods such as Christmas, but even before the new travel restrictions were announced there were already long queues in Kent as retailers and other businesses tried to stockpile goods in preparation for a potential no-deal Brexit.

Kent Police have launched Operation Stack – an emergency system to park lorries on the M20 motorway at times of disruption – to help cope with congestion on the county’s roads.

Sainsbury’s warned that “if nothing changes”, we will see gaps in supply on lettuce, some salad leaves, cauliflower, broccoli and citrus – all of which are imported from continental Europe at this time of year.

Meanwhile, Vernon Mascarenhas of NCGM catering supplier Nature’s Choice said he expected to encounter shortages of short shelf-life products such as leafy salad vegetables and soft fruit as early as Wednesday (23 December) due to European hauliers’ reluctance to send lorries over the border.

Indeed, there are reports that hauliers in continental Europe won’t want to enter the UK if their drivers could be stranded here ahead of Christmas.

The situation has been compounded by reports of panic-buying at UK supermarkets in response to the travel bans. Shoppers were pictured queueing in the early hours on Monday (21 December) to stock up on food and other goods in preparation for Christmas.

“Baby spinach, rocket, mixed salad, cos, gem, iceberg, raspberries and strawberries will be the first produce lines affected,” predicted Mascarenhas, adding that cucumbers, peppers and courgettes, which have a bit more shelf life, could be next to run short.

He said whoelsale prices of the affected lines rose by around 20 per cent on Sunday night (20 December), and he predicted that retail prices will start to rise in around ten days' time prices due to the scarcity of product.

However, Julia Wood of supermarket salad supplier PDM Produce said the company still had enough produce making its way from Europe to the UK in time for Christmas.

“What we’ve got up until Christmas I don’t see being much of an issue, but I think it’s between Christmas and New Year that’s going to be difficult,” she said.

“If it’s a 48-hour closure, I hope we can get around it, fingers crossed. If it’s longer than that, I think the whole marketplace will be short.”

Today (21 December) an emergency Cobra meeting is taking place to discuss the situation regarding international travel and the steady flow of freight into and out of the UK. Richard Burnett of the Road Haulage Association told BBC News that it would be critical to understand whether the travel ban is going to last beyond 48 hours.

Burnett said transport secretary Grant Schapps had told him he was “very confident” of navigating the disruption, possibly by testing drivers before they leave the UK and return to Europe. However, he warned of “significant challenges” if the travel ban lasts more than two days.

“Many hauliers from Europe probably aren’t going to want to come into the UK if they’re going to have stranded drivers here ahead of Christmas,” he said.

FDF chief executive Ian Wright added on Sunday night (20 December) that the ban on freight traffic between France and the UK “has the potential to cause serious disruption to UK Christmas fresh food supplies – and exports of UK food and drink”.