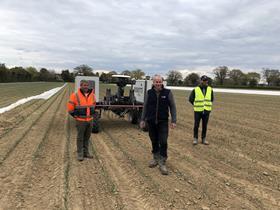 The first commercially available robotic tractor has been put to work at a vegetable farm in Suffolk.

Looking to reduce its reliance on seasonal labour, and mitigate bans on herbicides and other chemicals, vegetable farming cooperative Fram Farmers recently took delivery of the Robotti 150D for use at Home Farm Nacton near Ipswich.

TheRobotti150D has been in operation on the farm since mid-April,weedinga number ofvegetable crops using a harrow attachment.

“A large amount of our produce is organic, sowe are increasingly limited in how we can control weeds,” explained the farm director Andrew Williams.

“Mechanical weedingis repetitive work, as is manual weeding, and sourcing seasonal overseas labour is becoming increasingly difficult.Wewanted to future-proof the farmandRobottiis perfectly suited to our set-up.”

Designed and manufactured by Danish agritech firm Agrointelli, the robot is best suited to managing bed systems and row cropsas it carries the tool attachments in its centre, evenly distributing the weight across all four wheels.

It can be fitted with various tools to weed, plant, cultivate or spot spray, among other tasks, with the ability to operate unmanned up to 24 hours a day using GPS mapping technology.

The robot travels currently travels of up to 5km/h but there are plans to increase the top speed to 8km/h if regulations permit.

Itslow ground pressure,lightweight and four-wheel drive mean it is less likely to get stuck than aconventionaltractor, according to Agrointelli,alsoreducingthe risk of soil compaction and structural damage to the soil.

There are currently 15 Robotti robots in operation across Europe and this number will rise to 50 by the end of 2021, the agritech firm said.

“It can be in operation 24 hours a day, so there is a long window ofopportunityfor it to make a difference in thecrucialweeding stages of the crops, fitting well into our cropping plan,” said Williams.

“It does exactly what we need, moving soil in the early stage of growth with guaranteed precision.

“It will initially be used for weedingthis year,but wealso plan to use it fortoppingand drillingin the future, maybe even transplantingor– who knows?”

TheRobotti150Dis autonomously controlled via an onboard computer, following a pre-programmedroute through the field.

The model in use at Home Farm has two Kubota 75 HP Dieselor bio-fuelengines. The left engine propels the machine and powers theconventionalthree-pointhitch,meaning it can be fitted with standard implements and performmultiple tasks in the field throughout the season. The right engine drives the power take-off (PTO), and each engine can take 110 litres of fuel.

“It is equipped with RTKGPS,sothe set up on any farm is simple.It tookapproximately 10 minutes to map a4-acrefield at Home Farm, and a further 10 minutesto log the weeding plan into the system.

“It is importantfor this to be accurate from the start, as it will determine reliable performance.”

In the office at Home Farm, Williams has access tothe onlineRobottiportal, providing real-time updates of the machine’s progress.

“I can leaveRobottiworking in the field quite happily, knowing that it will send me an alert if there is an issue, orifsomething unexpected is in its way. It has front and rear cameras, which I can view at any time,” he said.

“The portal tells me how much fuel is in the tank, howmany hours it has done, and how much time it has left before the fuel runs out.It will also tell me when it’s finished one field, so I can ensure it’s taken to the next field to start its newjob.”