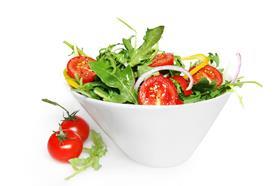 It may seem hard to believe that week-old supermarket salad may be healthier than fresh homegrown greens but that is what the latest research from the University of Reading in the UK suggests.

Anti-cancer compounds in rocket salad leaves have been found to increase during post-harvest shelf life, countering the idea that nutritional content decreases during commercial processing.

Food scientists from the University of Reading have discovered that compounds called isothiocyanates (ITCs) that have properties that fight forms of cancer, including prostate and gastrointestinal cancers, were significantly more abundant one week after processing in species of rocket.

In the study, the ITC sulforaphane increased by up to three times following commercial processing and seven days of shelf life.

Dr Luke Bell, a food chemist from the University of Reading said: “The discovery is really surprising, going against the assumption that nutrients found in rocket will dissipate over the period of time following harvest.

“Our study has shown that the processing actually has a potentially beneficial effect to consumers, and that rocket lovers can have confidence in the health boost a bag of rocket will give them.

“The biggest boost in these cancer-fighting compounds came seven days after processing, but begin to tail off after that.”

The researchers also conducted sensory analysis of rocket, to determine whether the cancer fighting compounds were more or less prevalent depending on the flavour profile.

Bell continued: “We found that there are some distinct varieties of rocket; some that are very hot, and some which are quite mild. The important thing is that the cancer-fighting compounds are prevalent in each variety, meaning that regardless of whether you like rocket mild or hot and peppery, you will still get the same potential health boost.

“With regular consumption of rocket and sulforaphane, consumers could potentially improve their long-term health and reduce the risk of developing other chronic diseases, such as cardiovascular disease.”

The study was financed through a government-funded BBSRC iCASE award to support bioscience students to undertake research, and partly sponsored by Bakkavor and Elsoms Seeds.

As well as both making a financial contribution, Elsoms provided the seeds for experiments and Bakkavor allowed researchers to use their facilities for field trials and processing the rocket leaves.

“As a leading supplier of prepared salads we are keen to support research projects such as this. It helps us to further understand the role key ingredients can play in the healthy eating habits of consumers”.

Elsoms MD Robin Wood added: “This has been a valuable study as part of our ongoing research and development focusing on the properties and flavours of herbs. We want to understand how we can improve the taste sensation of rocket for the benefit of the consumer so we were delighted to support the project which has given us valuable information for our rocket breeding programme.”