Takeaways 'should stop giving away salad' 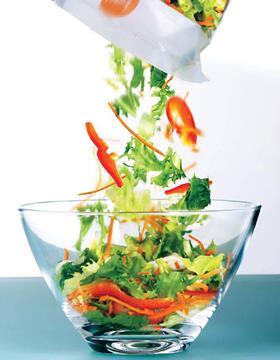 Takeaway outlets shoud stop giving away free salads as almost all are being thrown away uneaten, according to a new survey.

Research from BusinessWaste.co.uk, which surveyed 3,500 takeaway food customers, found that 99 per cent of free salads given away to takeaway establishments go uneaten, with many thrown into the bin unopened.

The startling statistics showed 94 per cent throw the free salad away unopened, while a further one per cent put it in the fridge and throw it away later. The remainder leave it in the shop of give it back to the delivery person.

BusinessWaste.co.uk suggestedthe reluctance of many people to eat salads from takeaways could be due to the mistaken perception that there's probably something wrong with it, or that it has been prepared in an unhygienic kitchen.

'A plastic bag's probably not the best way to present a salad, to be honest,' said BusinessWaste.co.uk spokesman Mark Hall. 'Customers have a mental image of the food being stuffed in there by bare hand, which it most certainly isn't. But it's a hard image for most people to shake.'

Hall called on takeaway joints such as curry houses and kebab shops to help reduce food waste by not throwing in a free salad with an order and leaving it for customers who actually want it.

'It's a very simple solution,' said Hall, 'And one that will save food establishments money and puts and end to the thousands of tons of food wasted every year.'

He added that it would also help save on the hundreds of thousands of plastic bags used to package the unwanted salad.