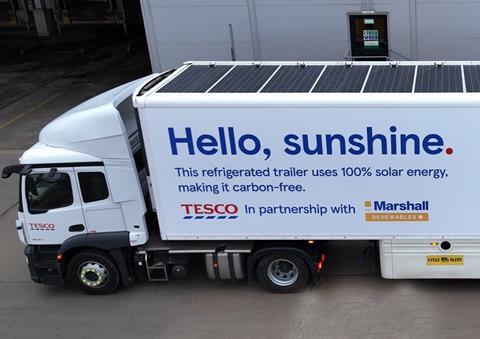 Tesco has introduced HGV trailers with refrigeration units powered by solar panels rather than using traditional diesel engine technology in a bid to reduce its emissions.

The first 13.6 metre refrigerated trailer based at Tesco’s Peterborough Distribution Centre has already hit the road and is delivering stock to stores across the east of England, with three more destined for Peterborough later this year.

The joint initiative with Marshall Fleet Solutions will see each trailer save around 2,000 litres of diesel per year and over five tonnes of carbon per year.

Each trailer roof is fitted with 12 lightweight Titan solar panels that store the electrical energy in long life lightweight lithium batteries to provide power to the refrigeration unit.

Tesco has committed to become net zero in its own operations by 2035 and in December last year the retailer began trialling electric heavy freight articulated trucks to deliver goods to its distribution centre in Magor, Wales.

Tesco fleet engineering manager Cliff Smith said: “Our distribution network is one of the largest in the UK and will play an important role in our efforts to become net zero by 2035. With our electric HGVs, electric home delivery vans and now solar powered refrigeration units, Tesco is leading the way in electric haulage innovation, helping to tackle road transport emissions.”

MFS managing director Mark Howell added: “With a significant trailer fleet, the successful use of solar powered refrigerated trailers within the Tesco distribution operation cannot be underestimated, in terms of its significantly positive environmental impact.

“Both Tesco and MFS share similar sustainability and carbon reduction plans. As a result of MFS’s long association with Tesco as approved suppliers of Thermo King transport refrigeration systems, this initiative builds on the strength of this relationship, whilst helping to deliver on Tesco’s global sustainability goals.”