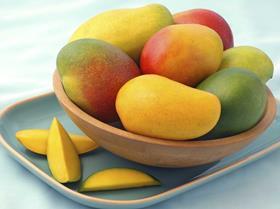 The exotics category is seeing buoyant growth in volumes and value, with several subcategories poised to follow mangoes into the mainstream.

A 7.2 per cent rise in value has been matched by a 6.8 per cent volume increase over the last year, helped by category successes from Aldi, Lidl, M&S and Waitrose [KWP, 29 March 2015].

Exotics performance has been driven by a six per cent rise in shopper frequency, according to Kantar analysts, as well as increased penetration. Encompassing both niche and mainstream products, exotics is also seeing strong growth in the prepared sector, including capitalising on the trend for convenience through ready-to-eat mangoes, and using the health message to promote pomegranate products.

Rob Cullum, managing director at exotics grower-importer Pacific Produce, explains how pomegranate supply in particular has struggled to keep up with demand. “Up until recently, demand has outstripped supply for southern hemisphere pomegranates,” he says. “For me it’s still a niche fruit, although it does have the advantage that it’s well known in many countries. But there will be a moment when there will be too much supply – we’re not far away from reaching capacity.

“Wholehead pomegranate is not a product you can promote well – it’s not a snack item. The growth is in pomegranate products, as it uses the whole fruit.”

Cullum believes certain exotics, including figs, papaya and persimmon have potential to follow mangoes into the mainstream, but warns that quality will be key to making this happen. Pacific Produce currently sources figs from Argentina and Turkey – between January and April for the former, and from late August to mid-October for the latter, and Cullum says volumes were up in the first half of the year. “Figs are definitely still in the exotics category, but they are one in a group that could follow the success of mango. Whereas Argentine figs are sometimes airfreighted, the Turkish supply really drives consumption as you can bring them by road.”

Commercial director at importer Compagnie Fruitiere UK (CFUK), Toni Direito, believes growth in the exotics category will come from diversifying ranges. “Due to changing consumer trends and eating habits the UK exotic market is growing rapidly. Diversity of range, along with competitive pricing, is paramount for continued success,” he says. “We are focusing on exotic vegetables and fruit, as a direct result of demand from customers on the shirt-tails of the existing fruit and vegetable lines we are currently supplying, and to broaden our supply range.”

The company has strong supply links with Africa – Direito says its own mango-growing operations in the Ivory Coast have enabled links with other countries including Kenya, Rwanda and South Africa, and it is also developing its links with Costa Rica and Jamaica.

“Our strongest lines with a loyal following include fine beans, mangetout and sugarsnap peas, and our own production mango from Ivory Coast,” says Direito, adding that CFUK currently supplies UK supermarkets via food processors and foodservice firms.

Meanwhile, Cullum notes that this year’s Peruvian mango season has been unusually difficult. “It’s been a difficult year as grower expectations have been high due to it being a mild El Niño year, and so crop forecasts have been fairly accurate. The US paid very high money at the beginning of the season, which added fuel to the fire. Europe then couldn’t handle that expectation – retail prices went up and sales slowed as consumption went down. It created quite a lot of headaches, and it’s been a hard year on quality as well. Peru is normally one of the most stable mango suppliers, but it’s been a very tough season.”

Pacific Produce is Peru’s fourth-largest mango exporter, but it also has Keitt mango production in the Dominican Republic, where it is expecting higher volumes than last year and large fruit sizes.