New government figures show post-Brexit slump in UK exports to Germany, France, Italy and Spain – and failure to transition exports to the US and China, says ParcelHero 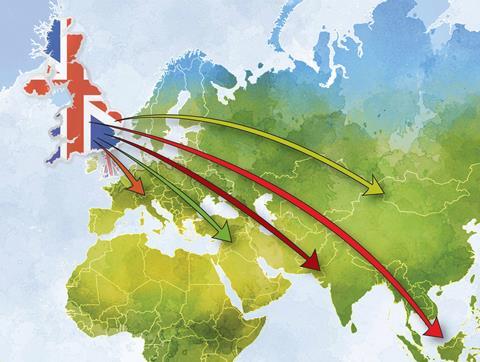 British products are in demand across the world, according to the government

New export figures from the government’s Office for National Statistics (ONS) paint a stark picture of the reality of post-Brexit trade and show how UK exports collapsed to the EU Big Four of Germany, France, Italy and Spain, says ParcelHero.

The international delivery expert said the anticipated increase in trade beyond Europe post-Brexit also failed to materialise since exports to the vital markets of the US and China slumped as well.

Britain’s exporters of goods – from food to cars – have all suffered from the impact of the “poorly negotiated” Brexit trade agreement and increased red tape and duties, he continued. The same applies to services, from finance to computing, which now fall outside the regulated EU services market.

“Perhaps most disappointingly, these latest results reveal Britain failed to successfully transition away from the EU to other lucrative overseas markets – one of the positive outcomes promised by Brexiteers. Looking at two vital export markets beyond the EU, the numbers also tumbled,” Jinks said.

“And the growth market of China, which British companies such as Jaguar-Land Rover had made a key priority, produced another collapse. In pre-Brexit 2019, the UK exported £35.872bn of goods and services to China. In 2020, that tumbled to £27.162bn, a slump of nearly £9bn. The following year, there was a moderate improvement, as combined figures rose to £27.488bn, but this was still well short of their 2019 total.