UK retailers should break free from ‘race to the middle’ 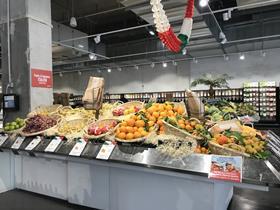 The fresh produce aisle at Leclerc Bio & Italien in Nice

I have recently been working on a project looking at how mainstream supermarkets around the world have been seeking to differentiate and put some clear blue water between themselves and more price-led competitors.

Over the last five or so years, I have seen some genuinely amazing work from retailers in North America, South Africa and throughout Europe in terms of doing things that discounters cannot and providing shoppers with genuine reasons to cross the road.

Recent trips to France and Germany have just cemented my belief that overseas supermarkets have it right and that British supermarkets, while pursuing perfectly logical courses in short-term financial terms, might well be left to regret some of the decisions they are making at the moment.

While British supermarkets are currently obsessed about cost cutting and efficiencies, other retailers around the world are instead looking at how they can surprise and delight their shoppers while driving differentiation and, on the back of that, sales growth.

Although some of these initiatives might be fairly esoteric, such as in-store pubs, smokehouses, coffee roasteries, and world-leading sushi offerings – rather than the cookie-cutter franchise counters we get here – a lot of the differentiators I encounter are both more mundane and scalable.

I totally get that displaying produce in plastic crates is a great contributor to efficiency, but this leads to a very stark and utilitarian feel and an environment in which any out-of-stocks are painfully obvious. Produce departments in many other markets are much more adventurous and sensory, helped in no small part by the fact that foreign operators seem to have a lot more fresh produce on offer, as well as much more sophisticated touches like wooden fixtures and the use of straw and wooden crates.

Throw in some other touches like fresh orange juice machines, pineapple machines, and smoothie bars, and produce departments can become destinations in their own right.

In theory, the produce section should be a sensory delight that heralds the attributes of the store beyond – an experience one encounters first in the shopper journey through the supermarket, which conveys freshness and abundance. Sadly, in many UK stores that I visit, this introduction is a barren and sterile landscape of gappy shelves and all of the joyous exuberance of a municipal sports centre.

The current race to the middle in the UK grocery sector is seeing some of the main protagonists actively strip out differentiators in order to improve the bottom line. As I said, this makes total sense from a shareholder perspective, but, from a shopper perspective, we are heading towards a homogenised mid-market where what used to set apart the supermarkets from the discounters is being eroded before our very eyes.

Founder of Walmart, Sam Walton, always extolled the benefits of swimming upstream, but there are very few British retailers, with the possible exceptions of Morrisons and M&S, who are building in more and more differentiators rather than taking them away.

It seems that every week brings news of more café closures, counter closures and staff cuts as the big retailers try to find some cash to reinvest in price. I’m no expert, but constantly trying to generate resources to fight an unwinnable war seems to be more than slightly futile.

Supermarkets will never be as efficient or as cheap as discounters. So rather than trying to bury their heads in the sand and ignore this fundamental truth, perhaps a recalibration of strategy might be required.

While supermarkets might lack in price, they could have strengths in areas like variety, value-added services, quality, availability and experience. It seems that by prioritising spreadsheets over shoppers, short-term gain is perhaps all that is being achieved at the expense of long-term pain.