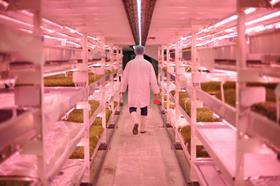 A range of salad produced in tunnels underneath London is now available in Ocado in the first major retail listing for innovative salad producer Growing Underground.

Co-founder Steven Dring said: “We are all absolutely thrilled to have secured this deal with Ocado. We’ve been working for years to perfect what we do and we’re so excited about this retail range; sustainable, low-energy growing of exceptional produce is a central part of our ethos and we’re delighted that through this partnership with the UK’s leading online supermarket we can now share our amazing micro-herbs with consumers.'

The business has so far been supplying London wholesalers, farmers markets and Michelin-starred restaurants, while it trials growing techniques and developed awareness for the concept and brand.

A range of 14 different micro herbs are now harvested, mixed and packed daily, and then distributed nationwide via Ocado. New product trials are ongoing and the farm has the capacity to quadruple its growing space as demand increases.

'We’re so pleased that Ocado have put their faith in a small start-up that is working hard to promote innovation and sustainability in British farming, and are very encouraged by what this could mean for the future of the industry,' Dring added.