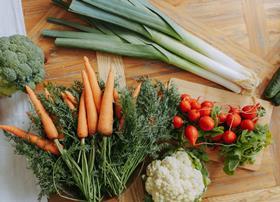 A return to seasonality would make the food industry more sustainable

With COP26 taking place recently, accompanied by all the associated debate and narrative, it has been interesting to see the role that food will play in the future efforts to safeguard our planet. I think we all realise that something needs to change in the world of growing, distributing, selling and consuming food but the lack of consensus on what these changes should be is faintly alarming.

Arguably, there has never been a more confusing time to be a consumer or a shopper. Mixed messages abound from governmental organisations, environmental groups, suppliers and retailers, and the lack of uniformity in labelling and dietary recommendations, makes even the most cursory attempt to eat healthily and sustainably an absolute minefield.

Sure, we all know that eating more produce is a good thing to do, with the UK government recommending five portions a day and some scientists saying 10 would be much better. At the same time, a rather simplistic narrative that meat is bad and plant-based is good is coming to the forefront, and I worry that consumers are getting more than a little baffled by the conflicting advice coming at them.

As with any oversimplified narratives, a lot of nuance is being forgotten. There was lots of talk this week about avocados and how many restaurateurs are looking to minimise their use – an acknowledgement of the fact that the way they are grown, the way they are transported, and the impact they have on their domestic environment is really sub-optimal. So, eating more produce is great – as long as it’s not avocados.

The whole ‘meat is bad, plant-based is good’ argument seems to be missing a few points too. Plant-based is being used as a blanket synonym for healthy and sustainable when nothing could be further from the truth.

We should all remember that the phrase ‘plant-based’ could equally include vodka, heroin and tobacco and even a modest investigation of the dietary attributes of some vegan products suggests that what they lack in meat they more than make up for in salt and other unwelcome additives.

That’s before we get onto the issue that a lot of them are soya-based, which has obvious implications for deforestation.

For many years there has been a similarly simplistic view about organics being generally awesome with very little qualification applied to this sentiment. An article I recently read about ‘how to be a greener shopper’ made the perfectly valid point that flying in organic items from Peru creates huge amounts of environmental harm despite the benefits it might have created in the field.

Having worked in and around the grocery retail sector for 25 years, I think I’m supposed to be some sort of expert and I have absolutely no idea what the right way forward is for the food industry at the moment.

I sense that what is required is an end to permanent global summertime and the entitlement we have given ourselves to buy and eat any fresh fruit or vegetables at any time of the year.

A return to local sourcing and, importantly, seasonality is going to be essential, which might mean an increased reliance on frozen or canned local produce, rather than the expectation of fresh produce of every description 365 days a year. And let’s face it, lots of imported, unseasonal items are fairly insipid anyway. So, what we gain in availability we might lose in authenticity and taste.

What will also be required are some neutral but authoritative recommendations and labelling initiatives from governments, NGOs and the produce industry as a whole to communicate the health and environmental attributes of various products.

Bryan Roberts is a regular contributor to FPJ's print edition. Check out his latest retail insights on his Shopfloor Insights blogand via Twitter.