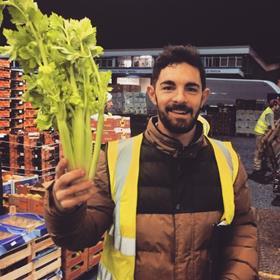 A competition to ‘Find the Fenland Celery’ that was run by wholesaler French Garden Bristol has helped boost sales and raise awareness among local food writers.

Managing director of French Garden Bristol, David Foster, visited G’s at the start of the Fenland Celery season to view the crop and growing technique.

With an ambitious target to sell 50,000 sticks before the end of the season, Foster returned to Bristol to launch the competition among customers, who had to share a photo of themselves with Fenland Celery and tag French Garden Bristol on social media, with the prize as a meal for two at a local restaurant, worth £450.

The campaign was shared and supported by local food writers and bloggers, with celery reaching a range of customers, including exports to Rungis market in Paris.

G’s said it has had a “very successful” re-launch of Fenland Celery this year, with sales in the wholesale markets reaching around 11,000 sticks, compared to 3,500 in the same period last year.