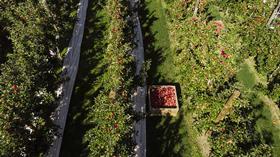 The horticulture industry in Hawke’s Bay, New Zealand has called for innovative thinking as the region and the rest of the country looks for solutions to current labour shortages.

In a joint statement released by regional authorities, Hastings District Council and Hawke’s Bay Regional Council said the area’s horticulture and viticulture sectorsin needed approximately 10,000 seasonal workers to work across the region starting from next month.

Sandra Hazlehurst, mayor of Hastings, said if the fruit is not picked, it puts thousands of permanent jobs in our community at risk.

“More than 8,000 local people are permanently employed in Hawke’s Bay in and around the horticulture and viticulture sectors, from pack-houses to the port,” Hazlehurst said.

“But these permanent roles depend on the trees being planted and pruned and the fruit being picked – all of which is looking more and more difficult with a severe labour shortage pending.”

Covid-19 has severely depleted the country’s seasonal workforce had been limited travel by travel and some pacific workers had also been enticed to Australia.

Alan Pollard, chief executive of New Zealand Apple and Pears, said the potential economic consequences of this issue are enormous and could cripple the region’s Covid-19 recovery.

“The Hawke’s Bay economy has at risk NZ$715m (US$478m) of GDP in apples and pears alone, and well over NZ$1bn (US$669m) with wine and other horticultural crops,” Pollard said.

“This is an issue facing many regions throughout New Zealand – putting at risk NZ$9.5bn (US$6.3bn) in the country’s overall economy. This just cannot happen.”

The statement said some of the solutions being considered included attracting unemployed New Zealanders, school leavers, and tertiary students, using workers from corrections facilities who can work during day release, flexible work hours, and new technology.

Hazlehurst said the region is also working with central government to ensure its immigration policies are suitable.

“We are meeting with the Immigration Minister when he visits Hawke’s Bay later this month to discuss what can be done - the horticulture and viticulture sectors need all of our support to address this urgent situation and we look forward to having those conversations,” Hazlehurst said.