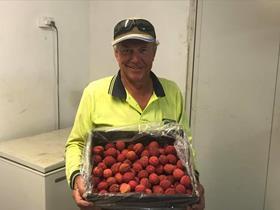 'Within a couple of years we should have enough to sell out in commercial numbers,' commented Dixon.