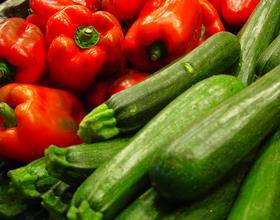 Higher prices of zucchinis and tomatoes have played a role in higher vegetable prices in New Zealand for both June and over the past year.

Seasonally high prices for tomatoes, cucumbers, lettuce, and zucchinis all contributed a 7.6 increase in the overall price of vegetables from May 2020 to June 2020. Although, prices for winter crops including potatoes, onions, and carrots saw typical falls.

Zucchinis saw the largest price rise in the period jumping 74 per cent due to limited domestic and imported supply.

'New Zealand has a limited supply of courgettes around this time of year as the local growing season comes to an end, so we would typically see zucchini imports from Australia fill the gap,' Johnson.

However, all imports of fresh cucurbit including zucchinis from Queensland, were suspended in December 2019 due to the cucumber green mottle mosaic virus. It is still unclear when this trade suspension will end.

“Zucchini prices tend to peak in September, but the shortage of supply has pushed prices up to record-high levels this month, in the absence of supply from Queensland,” Johnson said.

'We have seen zucchini prices briefly top NZ$20 per kilo when imports from Australia were suspended in 2018 for the same virus. Foodies may need to look for cheaper substitutes in their recipes like eggplant, pumpkin, or even cabbage.”

Prices were also up long-term as according to Stats NZ, in the year ending June 2020 fruit and vegetable prices increased 10 per cent year-on-year, the largest increase in over three years.

This increase was largely influenced by tomato prices, which increased 48 per cent in the year to a weighted average price of NZ$7.81 per kilo, about NZ$2.50 more expensive than June 2019.

Johnson said carbon emission unit prices had reached historic highs, which may have caused some tomato growers to change the way they heat greenhouses.

“This will affect the supply of tomatoes and in turn the prices, particularly in the cooler southern regions,” Johnson explained.